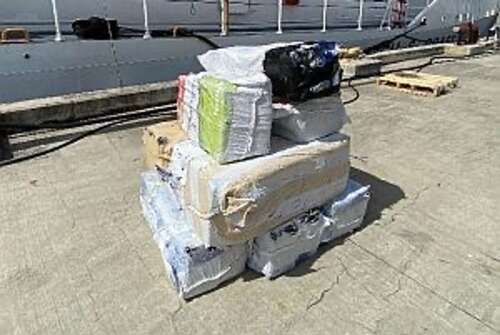 The United States Coast Guard says it recently offloaded about 1,289 pounds of cocaine with an estimated wholesale value of about US$11.7 million at Coast Guard Base San Juan following two separate vessel interdictions in the Caribbean Sear near Puerto Rico. It also transferred custody of six suspected smugglers.

“These interdictions are the result of multi-agency efforts involving the Caribbean Border Interagency Group and the Caribbean Corridor Strike Force,” said the US Coast Guard in a statement, which also said that this most recent interdiction occurred during a routine patrol on April 11, after the crew of a US Customs and Border Protection multi-role enforcement aircraft sighted a suspect vessel in waters northwest of Aguadilla, Puerto Rico.

The US Coast Guard said the vessel was carrying four men, Dominican Republic nationals, and six bales of suspected contraband, which tested positive for cocaine.

The cutter crew apprehended the suspects and seized the contraband.

It is also reported that during a routine patrol on April 6, the crew of a US Customs and Border Protection multi-role enforcement aircraft sighted a suspect vessel north of San Juan, Puerto Rico.

The US Coast Guard said watchstanders in Sector San Juan diverted the cutter Joseph Tezanos that arrived on scene and interdicted a 30-foot go-fast vessel which was carrying three men, also nationals of the Dominican Republic, and eight bales of suspected contraband, which tested positive for cocaine. The cutter crew apprehended the suspects and seized the contraband, the US Coast Guard said.

One suspected smuggler from that group, who required medical care ashore, was medically evacuated last Thursday to a hospital in Puerto Rico.

“You can expect to see many more of these interdictions from the Coast Guard and from our local and federal partners, as we work together to stop drug smuggling go-fast vessels from making landfall in the Puerto Rico or the US Virgin Islands.”

The US Coast Guard said special agents supporting the Caribbean Corridor Strike Force received custody of the detainees and the seized contraband, and that they are leading the investigation into this case.