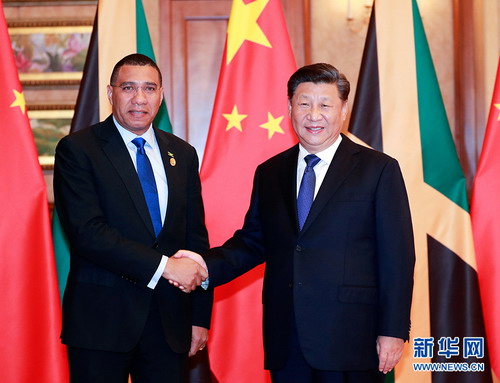 In stinging criticism of the Holness administration’s warming relationship with Beijing, United States Ambassador Donald Tapia has urged the Government to be wary of China’s deepening footprint in Jamaica, citing the Asian country’s lavish investment pitch as predatory and dangerous.

Tapia, who arrived in Jamaica in August, has shelved the diplomatic subtlety of recent US ambassadors, even using his Twitter account as a launching pad for invective against Chinese neo-imperialism at least four times last week, much in the mould of his boss, President Donald Trump.

“China is a dragon with two heads. If China came to Jamaica presumably with no strings attached, then why did you negotiate 1,200 acres of the most prime real estate with them? Because they need a return on their investment,” the ambassador said during an exclusive interview with The Gleaner.

“There is no way that you will be able to fund that highway in 50 years. The negotiation was 1,200 of the most beautiful acres on the water that you gave to China, and they said they would develop it,” he added, referring to a land swap deal agreed under the predecessor Simpson Miller administration.

Tapia also cast Chinese financing at a rate of two per cent, through its Export-Import Bank, as contrived, arguing that no bank in capitalistic societies offered such uncompetitive rates. He also denounced as unfair the Jamaican Government’s concessions to China Harbour Engineering Company – and other construction firms aligned to Beijing that engage in major infrastructure projects – a missive that will hit the Holness administration and find favour with local engineers and developers who have lamented that they are often unable to bid for contracts because the Chinese have a leg up on the market.

The US ambassador scolded China for its appetite as part of a geopolitical game of chess, centred, he said, on extracting natural resources with ulterior motives, including in a hemisphere long viewed to be America’s backyard.

“When they (China) go into a country, they go after two things – the minerals and the ports. I could tell you horror stories of countries where they have taken over the ports because those countries could not pay for their investment; China usually has a great propaganda story as to why it has happened,” Tapia told The Gleaner.

“When America invests in the energy and education sectors, we are building a long-lasting effect and will contribute to stability and help to stem the brain drain. Those who talk about free speech, free enterprise and human rights are forgetting that those three things go together with Jamaicans, who are freedom-loving people, and one day, the chickens will come home to roost. So, take all you can from them, but remember that the West is standing there with you.”

Prime Minister Andrew Holness, who returned on the weekend from a eight-day tour of China in which he engaged in investment talks with President Xi Jinping and was regaled with musical performances and city tours, is expected to give details today, in the House of Representatives, on his travels, including plans for increased logistical and trade ties.

Meanwhile, Curtis Ward, former Jamaican ambassador and deputy permanent representative to the United Nations, told The Gleaner yesterday that America had telegraphed its displeasure with Sino-Jamaican pacts since the visit by then Secretary of State Rex Tillerson in February 2018.

“We shouldn’t be surprised. It has been going on for two years. Since that time, clearly, Jamaica has not paid attention to what the US has said, but has foraged ahead with its developments,” he said.

But Ward, who is an adjunct professor at the University of the District of Columbia, said that Washington should state whether it would fill the vacuum if Jamaica were to pull back from China.

Jamaica has benefited from billions of dollars in Chinese investment over the last decade, ranging from the divestment of the sugar industry, forays into bauxite mining, to major infrastructural projects such as the Edward Seaga Highway, and road expansion in urban and rural centres.

Chinese loans represent about 3.9 per cent, or $78 billion, of Jamaica’s $2-trillion debt.

On Sunday, Jamaica House announced that the Government would not take out any new loans with the Chinese, preferring instead to pursue private-public partnerships and facilitate direct firm-to-firm pacts.

“What is quite instructive is that the message is reaching the prime minister. The statement clarifying that we are not going to have China coming in with loans, changing the dynamics,” said Ward in reference to Holness’ decision to put a pause on loans.

Ward said, however, that Jamaica should not kowtow to foreign powers.

“This is in our national interest why we’re doing this. We’re smart enough to know what’s good for us. I don’t think we have the guts to say these things. Either you’re a sycophant or you stand on your feet. I’m not saying Jamaica should pick a fight with the US, but Jamaica should speak power to the US,” said Ward.