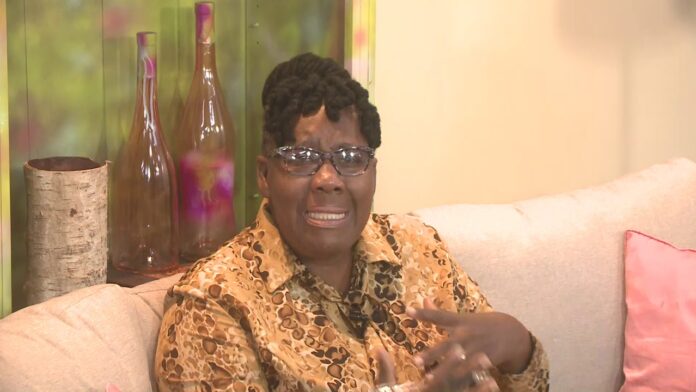 CITATION: Sister Joan Peters, the President of the Antigua and Barbuda Public Services Association (ABPSA), is best described as an advocate for The People.  A real grassroots, down-to-earth woman, she tells it like it is and believes that everyone has a right to be heard and each one’s views should be respected.

She has a distinctive voice, a larger-than-life personality, and an even bigger heart filled with a genuine love for people and their well-being.

Peters started her journey in the Association in the late 90s.  As long as she has known herself, she has always wanted to help others to get ahead in life and the Union seemed like the perfect avenue to make this happen.

She is often heard emphasizing that “the Union is bigger than any one of us.”  Accordingly, she encourages colleagues to take hold of whatever opportunities become available in order to become the best Union members they can be.

No one is too old or too dumb to give valuable, immeasurable contributions; and, as such, everyone is welcomed where ABPSA is present.

In this regard, meetings are her default setting; and if it were up to Sister Joan, they would be held every week, multiple times a week, just to ensure that everyone has an opportunity to air their views and add to the decision-making process.

Sister Peters has always been a hard worker and gives her all 100 percent of the time, believing that once you commit to something, you must see it through to the end.

Long before she was President of the ABPSA, she was an advocate for co-workers at Holberton Hospital, where she was employed, and always supported fund raisers and other events.

She is passionate about seeing workers treated fairly and receiving what is due to them – as evidenced by her untiring activism on the streets and in the media.

She has served her Association in various capacities, moving from Regular Member to General Council Member, Executive Member, and Vice President and, in March 2017, was elected President of the Union, a post she holds up to today.

During the period 2004 – 2018, Sister Peters also served the Antigua and Barbuda Trade Union Congress as a Trustee, a General Council Member, then as an Executive Member.

She was elected President of the Caribbean Public Service Association from 2017 to 2018 and has represented the Union at regional and international meetings, including at the United Nations. She is respected by her counterparts who are all ready and willing to assist her in whatever way, once she asks.

Sister Peters is also a woman of God: a praying woman known for encouraging members who are facing difficult decisions or situations. She advises them to fight with all their might, but never to forget that it also includes getting on one’s knees and calling out to the Lord. She is very active in her church and takes her advocacy wherever she goes.

Sister Joan is equally devoted to her own family, where she is wife, mother, grandmother, aunt, and friend.