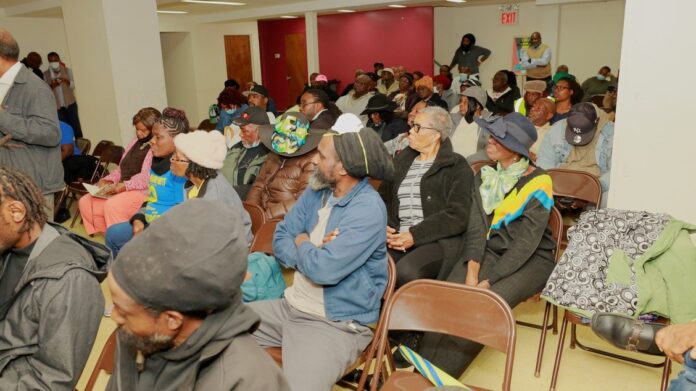 A strategy to create jobs and rebuild the economy through investment and economic diversification, was the highest priority issue on the agenda at the United Progressive Party (UPP) Public Forum on Monday night.

Antiguan and Barbudan nationals in New York and surrounding areas, got a chance to engage with the members of the UPP team on the final leg of the Diaspora Roadshow throughout the US.

The theme of the initiative was “Partnership for Investment and Nation Building” as the UPP aims to create important linkages to advance its development goals for Antigua and Barbuda. UPP Political Leader Harold Lovell, was joined on the panel by Deputy Political Leader Jamale Pringle, Candidate for St. Mary’s North, Johnathan Joseph and Candidate for St. Phillip South, Sherfield Bowen.

In a frank discussion with scores of Antiguans and Barbudans, the panelists indicated that a number of investment opportunities would be crafted specifically for the Diaspora. Opposition Leader, Hon. Jamale Pringle, reiterated the importance of the Diaspora as a stakeholder group in supporting the development of the country.

“Apart from their traditional roles as boosters of our economy, our nationals in the Diaspora contribute significantly to achieving our national aspirations, beyond their financial contributions. We want to support your interests and rights and to strengthen your ties to the land of your birth or ancestry,” Pringle said.

Lovell announced that a UPP administration would establish a Ministry of Diaspora Affairs and that the Consulate Office would be reinstalled to serve the needs of nationals in the North East region.

He also supported the rights of Diasporans to participate in the electoral process and made a commitment to help streamline the voter registration process.

“We will put the structures in place to facilitate the Diaspora in coming back home to vote and we will simplify the process so that they can take advantage of opportunities for investment or homeownership as well,” said Lovell. “When we are masters of our own destiny we strive to become ambassadors of our country, because we recognize that we are no longer doing it for other people but for ourselves.”

The panel responded to questions from the audience on a range of topics including the status of agricultural lands, the public accounts committee, the state of healthcare and education systems, child protection and social programmes. There was concern about infrastructural development in areas such as water, roads and affordable housing.

The Political Leader also highlighted some of the UPP’s major accomplishments while in office. He took the opportunity to refute false claims made by the ABLP two weeks ago at a New York town hall meeting, that the UPP had not secured any hotel investments during its tenure.

“In politics a certain amount of exaggeration might be expected, but it is mind blowing that the Gaston Browne administration would tell such outrageous lies when the evidence is there for all to see,” Lovell said.  Sandals Mediterranean Village, Hermitage Bay, Verandah, Sugar Ridge, Nonsuch Bay and 41 locally owned small properties were cited as properties constructed under the UPP administration.

The Political leader pointed out that while the UPP was proud of its record in tourism, there would be a shift to diversifying the economy by creating linkages between other sectors such as agriculture, culture, technology and education. He encouraged nationals from all disciplines, particularly those with expertise in the aforementioned areas to assist in nation building, by transferring the knowledge and skills that they have acquired.