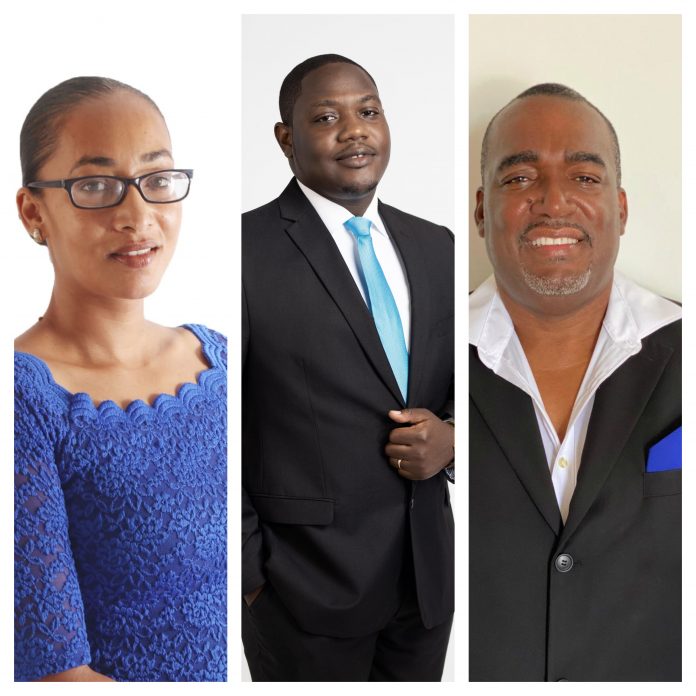 Their brief biographies are attached for your perusal and publication.

A multicultural and multi-national daughter of the soil, Gladys Samuel Potter, was born in Grays Hill to a Dominican Republic mother and St. Lucian father.

She is a graduate of the Ottos Comprehensive School and the Business Studies Programme of the Antigua State College.  Working nights and attending classes during the day shaped her sense of industry and her drive to work for what she wants.

Gladys recognised the value of professional development to her progress and successfully completed courses in risk management; a Chartered Director’s course under the auspices of the Caribbean Governance Training Institute; and the Antigua & Barbuda Investment Authority’s Mind Your Business course.

These prepared her to take on a management position in a multi-business operation comprising a service station, restaurant and auto-body repair shop. There she managed personnel issues and also the business’ financials.

For thirteen years, from 2005 to 2018, Gladys worked for a gaming-software company, where she held supervisory and management positions.  She did several tours of duty overseas on the company’s behalf, including assignments in Bulgaria and in The Philippines, where she trained staff in the area of risk management.

A past vice president of the St. John’s Cooperative Credit Union, she also served as chairperson for the organization’s Human Resources Committee.

At the same time, Gladys and her husband, Mark, were involved in a number of personal business ventures, including the family-run farm, for over 20 years; and,  since 2018, she has been famously known as the proprietor of an ice cream parlour and restaurant.

But Gladys is just as famous for her volunteerism and community service – particularly to the benefit of the youth and the elderly.

She is a past president of the Mary E. Piggott Primary School’s Parent Teachers Association. During her tenure, considerable funds were raised to outfit the school’s remedial reading department, construct outdoor seating, and purchase school supplies.

In 2016, she inaugurated the Shine Your Light Expo, a yearly exhibition to highlight the talents of artisans, food and beverage manufacturers, performing artistes, and more, as a springboard for them to monetize their skills.  And since 2017, she has hosted an annual Senior Citizens Dinner in her community and garnered nationwide support for this event that benefits the elderly.

Gladys heads up the UPP’s Welfare Committee, providing assistance to the elderly and the needy, and is actively involved in the Party’s Women’s Forum.   Her colleagues describe her as a hard-working team player who creates solutions, not problems.

She is an active member of the Mountain of Fire and Power Ministries, where she nourishes her faith.  A dedicated family woman, she is the mother of three sons and a daughter, all of whom she describes as “amazing.”

Gladys Potter, affectionately called “Amalia,” is the genuine article: sincere and committed to developing her community and country. Her empathy for others and her ability to create partnerships for community-development projects embody the UPP’s “People First” philosophy.  Her aim is to be the refreshing breeze that blows away the current staleness of “business as usual” and brings lasting change to Rural South.

His political aspiration is driven by his passion for helping.  According to Anthony Smith, it is in his blood:  the legacy of his mother, father, and near-legendary grandmother, “Teacher Gen” from Potters, who were all dedicated to assisting the less fortunate and to community development.

As a child in school and in his village, Anthony gravitated to philanthropy, contributing wherever possible to the lives of the people around him.  Now, as an adult, he recognizes that a political opportunity will enable him to serve a greater number from a wider platform.  Therefore, he is grateful to have been designated by the United Progressive Party’s All Saints West Branch to represent his people.

Tony spent his early years preparing for such an opportunity, starting on the path to leadership at the early the age of 17.  It was then that he became heavily involved in the Sea View Farm Football Club, going on to hold the positions of Treasurer, Vice President, and President, testimony to his advanced professional development and desire to serve.

At present, Smith is the General Manager of the newly reconstructed Western Union and also runs the Easy Grabbs establishments at Jabberwock Beach and  Antigua Village.

To these positions he brings over 12 years’ experience in banking, customer service and investment solutions, having worked in various positions at the Community First Credit Union.  During his time there, he completed training and certification in Investment and Savings and in Compliance.

He particularly enjoyed his last position, Youth Savings Officer, which enabled him to develop a national program that taught young people the principles of finance and money management, savings and economics.  In addition to opening over 10,000 accounts, Smith is proud that he helped  to show students the importance of staying in school and getting a good education.

A proud graduate of the Antigua Grammar School, Smith is a strong believer in education’s power to transform.  Accordingly, he is looking forward to completing his Master’s degree in Leadership and Management at St. York’s University in England.

Newly married, Smith also believes in family and godly principles; in humanitarian improvement and church work; and in the advancement of women.   However, he says the men must not be left behind.  In order to build strong families, he recognizes that opportunities in business, sports, skills training, and spiritual development must be available to them.

As a young man, himself, he is concerned that too many youth are struggling to make a mark in the economic development of the country. “We need to create policies that help young people acquire wealth,” he says.  “Only a chosen few are doing well, while the others are struggling.  We must create a path to help poor people to climb; to give everybody a chance to reach the top.”

He is convinced that a United Progressive Party Administration will achieve that.

For nearly 20 years, he has shaped public opinion on social and political issues and earned himself a devoted following here and in the diaspora.  But given the economic, moral and political decline of the country, he has decided to “be the change he wants to see ” – and he sees the United Progessive Party as the vehicle for that change.

A favourite son of the Pigotts and Potters communities, Watts is steeped in the values, personalities and loyalties of the people he aspires to serve.  Accordingly, he was overwhelmingly selected to become the Party’s candidate for St. George, a constituency that is both large and diverse, and he proclaims himself ready and capable of doing just that: bringing representation to the people.

A man of many gifts, Watts is currently the Managing Director of the country’s largest media house, NEWSCo/Observer/Hitz FM, and a renowned disc jockey.  At the same time, he is a farmer and debt-collector, an events organizer and promoter, a feared researcher and respected archivist.

Watts is a founding member and was the first president of the good-governance advocacy group called The Movement.  Under the tagline “Ready to Rebel,” he was responsible for galvanizing protest action against the current administration on a number of controversial issues. And he has proved his mettle, time and again, by championing numerous social causes and mobilizing assistance for needy persons.

Most notable is the role he and The Movement played in welcoming and provisioning the people of Barbuda immediately after the devastation of their island in 2017.

Watts is also one of the movers and shakers of the patriotic group The Faithful Nationals, a coalition of organizations and individuals fighting for the interest of Antigua & Barbuda.

He has served the sporting community as the manager of the Rattlers Cycling Club; the calypso fraternity as an emcee and promoter of the art form; and lent his voice and influence to numerous fundraising and charitable endeavours.

A graduate of the Antigua State College’s Engineering Department, Watts completed his secondary education in Trinidad after leaving the Seventh Day Adventist School.

A devoted father, he considers his children not only his greatest accomplishments, but his inspiration for changing the status quo in Antigua & Barbuda