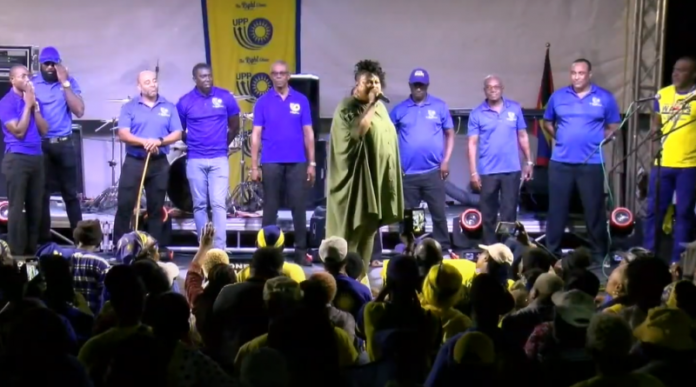 Several Candidates of the United Progressive Party (UPP) and the lone candidate for the Barbuda People’s Movement (BPM) have made their final pitch on why they should be elected to represent the people and the country.

The Candidates made their appeal during a gospel concert on Monday night, January 16, that sought God’s intervention into the wicked and evil state into which the country has fallen.

Many of the UPP hopefuls said they were buoyed by the event, and they pledged, once elected, to represent their constituents to the best of their abilities.

They also gave reasons why they are the “Right Choice,” come Election Day, Wednesday, January 18.

The event, which saw a selection of local performers take to the stage, was headlined by gospel artiste Bridget Blucher.  Her ministry ran into the early hours of Tuesday, January 17, with audience members and social-media followers describing it as powerful.

During the rally, the Candidates were blessed and prayed for, zone by zone, by several clergymen, including the Party’s chaplain, Pastor Paul Andrew, of Christian Assembly Ministries.

Meanwhile, today, January 17, was declared a day of prayer and fasting by members of the Evangelical Association.