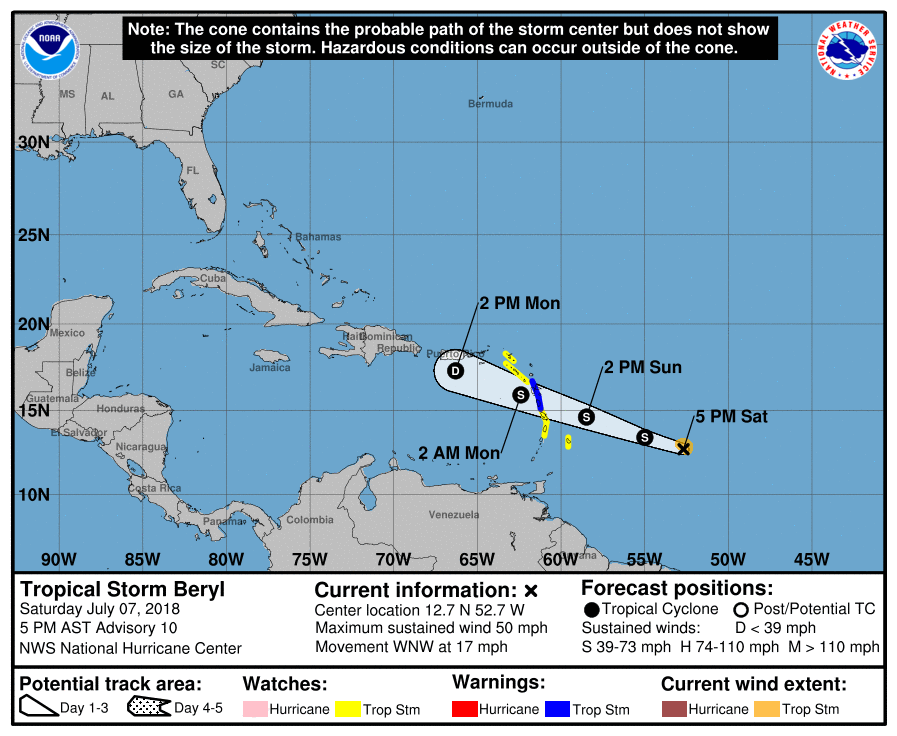 Beryl weakened to a tropical storm Saturday but was still expected to dump heavy rain over the Lesser Antilles at the end of the weekend on its way to the eastern Caribbean, bringing a new threat to islands still rebuilding from last year’s storms.

A tropical storm warning was issued for Guadeloupe and Dominica, the latter still recovering after a battering by Hurricane Maria in September as a Category 5 storm. Dominica’s meteorological service said weather conditions would start deteriorating Saturday night and warned of at least four inches of rain, with the storm expected to pass over or near Dominica late Sunday or early Monday.

Dominica Prime Minister Roosevelt Skerrit said in a public address that the storm’s track and intensity could still change and urged people to remain alert. He also asked people to store water because he said the government would be shutting down the water system as a protective measure.

“They should not let their guard down,” he said.

Officials in the French Caribbean island of Guadeloupe said people should prepare for winds of 50 mph (85 kph) and waves of up to 10 feet (three meters).

A tropical storm watch was issued for the French Caribbean territories of Martinique, St. Martin and St. Barts as well as St. Maarten and the islands of Barbados, St. Lucia, Saba and St. Eustatius. Deeper into the Caribbean, a state of emergency was declared in Puerto Rico, where Maria caused estimated at more than $100 billion.

Beryl had become the first hurricane of the Atlantic season Friday, but it weakened to a tropical storm Saturday. Late in the afternoon, the U.S. National Hurricane Center said Beryl had maximum sustained winds of 50 mph (85 kph). It was centered 605 miles (975 kilometers) east-southeast of the Lesser Antilles and was moving west at 17 mph (28 kph).

People in the Caribbean were taking no chances. Long lines were reported outside grocery stores on Dominica, Puerto Rico and elsewhere as people bought food and water.

Among those stocking up was Sandra Whitcher, an owner of Coffeeriver Cottages in Dominica.

“Here’s hoping it misses us,” she told The Associated Press, adding that crews fortified the roofs on all seven cottages that survived Hurricane Maria. “I can’t say I’m not scared, but I know we have prepared as much as we can possibly do.”

Forecasters said Beryl was expected to weaken further after entering the Caribbean. It was expected to pass south of Puerto Rico on Monday, but forecasters warned the storm-wracked U.S. territory could see up to 30 mph winds and heavy rains that could cause flooding and mudslides.

Forecasters said Beryl probably would dissipate once it moved south of Haiti and the Dominican Republic on Tuesday or Wednesday.

Puerto Rico Gov. Ricardo Rossello declared a state of emergency for the island and suspended work on Monday. The island’s largest public university also announced it would close, along with all state parks, natural reserves and El Yunque rainforest, a popular site with tourists.

Rossello told reporters the island would probably experience power outages, given that its electricity grid has become more vulnerable since Hurricane Maria. He said, however, that the recovery should be quicker since there are more power restoration crews and equipment on the island now. More than 1,500 customers remain in the dark more than nine months after Maria.

The governor urged people without sturdy roofs to move in with relatives or a government shelter. He recently noted that some 60,000 people still have only tarps for roofs.

“This system has been quite unpredictable,” he said.

Puerto Rico Health Secretary Rafael Rodriguez urged all those with serious health conditions, including diabetics, to seek shelter at health facilities, which have generators.

Meanwhile, a tropical depression formed in the Atlantic well off the North Carolina coast, and forecasters said there were no coastal watches or warnings in effect. The hurricane center said it would likely become a tropical storm Saturday night or Sunday and continue strengthening over the next few days while meandering at sea.

At 5 p.m. EDT Saturday, the storm was centered about 160 miles (255 kilometers) south of Cape Hatteras with maximum sustained winds of 35 mph (55 kph). It was stationary for the moment.