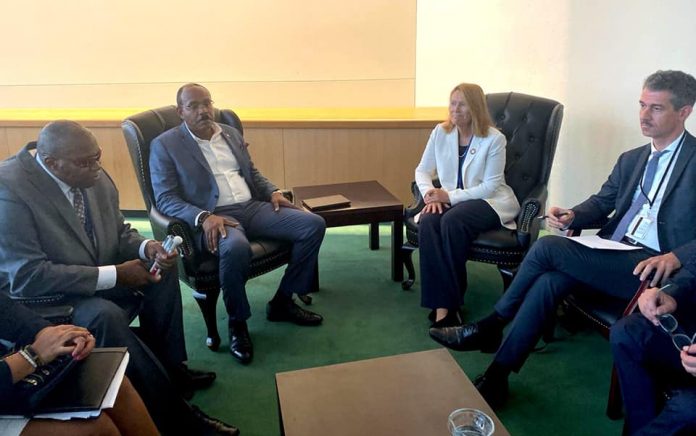 The United Nations Office of Project Services (UNOPS) has announced that it will inject 2.5 million dollars into projects in Antigua and Barbuda.

Prime Minister the Hon. Gaston Browne and Ms. Grete Faremo, Executive Director for the United Nations Office of Project Services held bilateral meetings on the margins of the 74th Session of the United Nations General Assembly this week, during which the announcement was made. Ms. Feramo announced that UNOPS has entered into an agreement with BAUpanel to construct 2500 homes in Antigua and Barbuda. This venture will also include the construction of a factory on the island and employ approximately 200 Antiguans.

It was also announced that Antigua will serve as UNOPS regional hub for the shipment of prefabricated homes to neighbouring islands.

Prime Minister Browne expressed appreciation to Ms Feramo for her confidence in Antigua and Barbuda and indicated that it is his government’s desire to provide quality and affordable homes to Antiguans and Barbudans.

Prime Minister Browne also thanked the Executive Director for UNOPS for the opening of an Innovation Center in June of this year. Both pledged to continue to ensure that the center will operate at its full potential, providing a space for innovative minds and technological advancement.