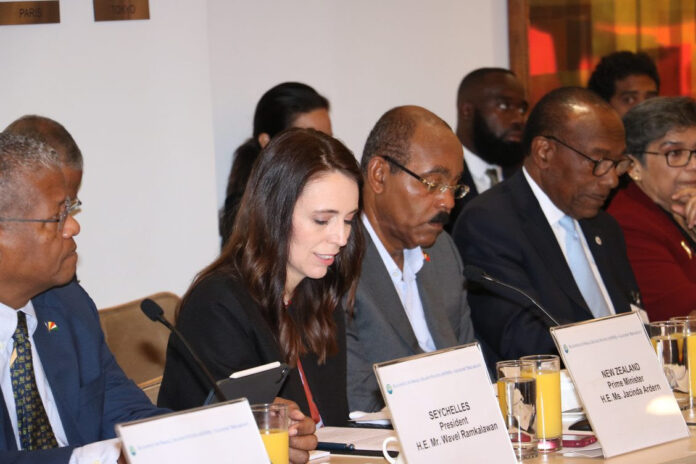 The Alliance of Small Island States (AOSIS) is adamant that at COP27 major emitters must do right by the world’s most vulnerable countries which experience the worst impacts of climate change. This was the consensus of 28 heads of state and ministers from the Caribbean, Pacific, and African, Indian Ocean and South China Sea regions when they gathered at the AOSIS Leaders Breakfast on 22nd September. The event was convened on the margins of the 77th United Nations General Assembly now taking place at the United Nations in New York.

COP27 is the pivotal UN Climate Change Conference (COP 27) which will be held in Egypt this November.

Islands continue to deal with the devastating impacts of climate change with limited capacity to rebuild and recover. Delivering remarks at the AOSIS Leaders Breakfast via a recorded message, United Nations Secretary General Antonio Guterres shared with the meeting the urgency in making the financing for Loss and Damage an agenda matter at COP27.

“We need a targeted, ambitious global response – including how to finance loss and damage, beyond our capacity to adapt. Polluters must pay,” the Secretary General declared.

“Grants and concessional financing currently fail to account for your islands’ unique vulnerabilities,” Guterres acknowledged, while throwing his full weight of support behind AOSIS members in their bid to “ensure eligibility and access to finance.”

The sentiments of the AOSIS leadership were supported by the Prime Minister of New Zealand, Jacinda Ardern, who AOSIS Chair Prime Minister of Antigua and Barbuda Gaston Browne praised as a ‘tireless supporter of SIDS.’ Ardern joined the leaders for the opening portions of their discussions and lent wholehearted support to their issues.

“I don’t need to articulate the problem to this audience. As Small Island Developing States you are only too aware that one major natural disaster can undermine years of development progress.” said Prime Minister Ardern.

The other big ticket item being discussed by the island leaders was the Multidimensional Vulnerability Index or MVI – a new diagnostic tool being advanced by the UN that could transform the global financial system and be a ‘gamechanger’ for SIDS.

Prime Minister Browne is also the Co-Chair of the UN High Level Panel on the MVI, and it is expected that once the MVI is adopted, it will be used by International Finance Institutions to guarantee concessional finance and debt relief solutions for the most vulnerable countries.

“We are at a critical and politically sensitive juncture for both these objectives [MVI and Loss and Damage]. There are powerful forces mobilised against us who are content with the status quo. To succeed against them we must be united” urged Prime Minister Browne.

“While the world fiddles, climate change marches on unabated and the hits keep on coming for our Small Island States. We must redouble our efforts and ensure the third pillar of the Paris Agreement is finally given its due in Sharm El-Sheikh.”