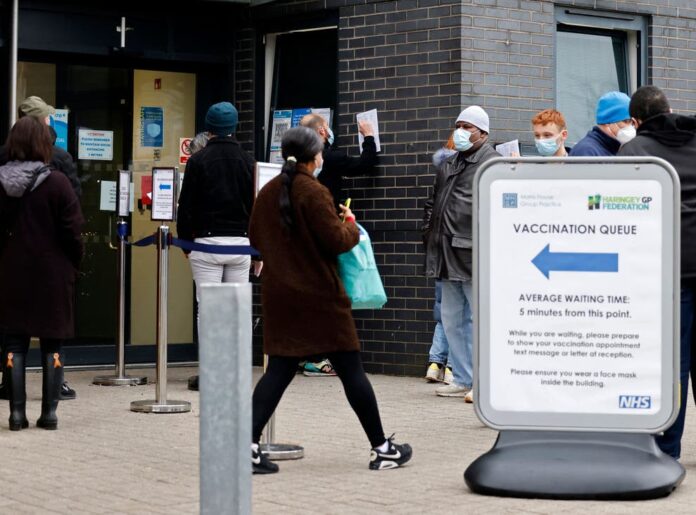 A further 90,418 people have tested positive for Covid-19 in the UK, figures show.

It brings the total number of infections over the last seven days to 513,574.

A further 125 deaths have been recorded, with 900 Covid-19 patients admitted to hospital within the last 24 hours.

The latest figures come after a record 93,045 Covid cases were reported on Friday.

Another 10,059 Omicron cases were recorded in the UK on Saturday – three times higher than the number recorded the previous day.

This brings the total confirmed cases of the variant in the UK to 24,968, UK Health Security Agency (UKHSA) said.

Meanwhile a leading government advisor has said a two-week circuit breaker lockdown after Christmas would be too late.

Stephen Reicher, professor of social psychology at the University of St Andrews and member of the Scientific Advisory Group for Emergencies (Sage), said it was clear that Plan B measures alone would not be enough to stop the spiralling numbers of cases.

Prof Reicher, who was speaking to Times Radio in a personal capacity, said the time to act was now.

On Saturday, Prof Reicher told Times Radio that “all the science suggests that (Plan B is) not going to be enough”.

He said: “The only way really, or at least the most effective way, we can have an immediate effect is to decrease the number of contacts we have.

“In many ways, the most effective way of diminishing contact is to have a circuit-breaker.

It comes amid reports officials have been drawing up draft plans for a two-week circuit-breaker lockdown after Christmas.

The Financial Times reported that Boris Johnson was presented with a number of options on Friday under a so-called Plan C, ranging from “mild guidance to nudge people, right through to lockdown”.

The newspaper quoted allies of the Prime Minister who claimed Mr Johnson still wanted to go down the guidance route, but that he also had to be realistic about the threat of Omicron.

Leaked minutes from Sage, seen by the BBC, said scientists had told ministers that tougher measures need to be brought in “very soon”.

The BBC reported the advisers had recommended moving to restrictions seen in step one and two of the easing of lockdown restrictions in the spring. This included a ban on indoor mixing and indoor hospitality.

They reportedly warned against delaying further interventions until 2022.

The Times reported that draft regulations were being prepared which could ban meeting others indoors except for work purposes and that pubs and restaurants would be limited to outdoor service only, for two weeks after Christmas.

It comes as Cabinet ministers are understood to have received a briefing on the latest situation regarding the Omicron variant.

There was no meeting of the Cabinet or further discussion but ministers were given an update on the data surrounding the variant.

Meanwhile, the World Health Organisation said the Omicron variant had been identified in 89 countries as of Thursday and had a doubling time of between 1.5 and three days.

Sadiq Khan has declared a major incident in London amid “huge concern” at the spread of the Omicron coronavirus variant across the capital.

He said he was “incredibly worried” about staff absences in vital public services including the NHS, fire service and police due to rapidly rising cases.

Omicron is now the dominant coronavirus variant in London, with figures published by the UK Health Security Agency on Saturday showing that 83.4% of a sample of detectable cases in the capital from December 15 and 16 were found to have S gene target failure (SGTF), a way of detecting the likely presence of Omicron.

The number of people in hospital with Covid-19 in London, which has seen some of the biggest rises in cases in the last seven days, has risen to 1,534, up 28.6% on last week, according to Government figures on Friday.

Mr Khan previously declared a major incident on January 8 due to the rapid spread of Covid-19 and its impact on the health service.

It was in place until February 26 as case numbers in the capital fell.