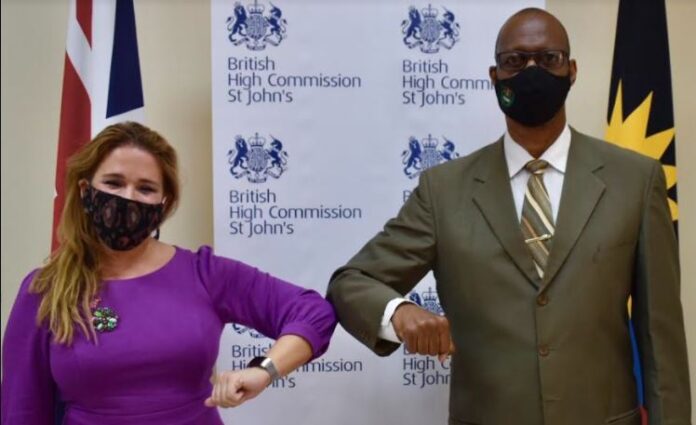 The UK has made another donation to support the Government of Antigua and Barbuda in its national security and defence efforts.

On Wednesday the Office of National Drug and Money Laundering Control Policy (ONDCP) received a selection of equipment that will aid them in performing their duties protecting the people of Antigua and Barbuda.

Cumulatively, the UK Border Force has donated XCD 30,000 (£ 8,000) of equipment to local law enforcement to increase the protection of officers and the efficiency with which they are able to carry out their duties.

During a handover of equipment to the Director of ONDCP today at Camp Blizzard Resident British Commissioner to Antigua and Barbuda reinforced the UK’s commitment to support the Antigua and Barbuda defence and security authorities, noting the challenges both nations share in their fight against crime.

Director Edward H. Croft, in response, first expressed much appreciation to the UK Border Force and the Resident High Commissioner for their timely donation. Our partnership over the years have resulted in successes against criminals and organised criminal groups by taking the profit out of crime.

The donated equipment will improve the protection of the men and women in their duties and enhance the agency’s capability in its continued efforts in the fight against drug trafficking, specified offences, money laundering, terrorism financing and financial crime.

To this end, the organisation would be closer to realizing its vision which is to become the Caribbean’s lead law enforcement agency combating illegal narcotics, money laundering and terrorism financing.