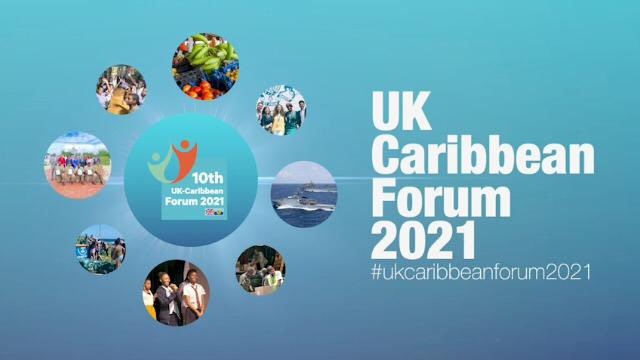 On Thursday 18 March, the Hon. E. P. Chet Greene joined other Foreign Ministers from CARICOM countries, Cuba and the Dominican Republic, and ministerial counterparts from the UK at the Tenth UK Caribbean Forum, the first to take place in a virtual space.

Also attending were the Premiers of the British Overseas Territories in the Caribbean and Secretary General of CARICOM, Irwin La Roque.

HRH The Prince of Wales gave a welcome address, in which he urged the UK and Caribbean to come together to find solutions to the global emergencies of climate change and Covid-19.

He paid tribute to National Health Service (NHS) workers of Caribbean heritage. Recognising the contribution made by the British Caribbean community, he noted his pride that 22 June is now Windrush Day in the UK.

Certain broad themes were an underlying constant throughout presentations, with many ministers alluding to the grave impacts of the COVID pandemic. Rt Hon Dominic Raab, Foreign Secretary in the Foreign, Commonwealth and Development Office, the meeting’s host, reaffirmed the bonds that brought the region together, and the UK’s commitment to the Caribbean, following a historic review of UK foreign policy this week.

With the hurricane season starting soon, he noted that the Royal Navy will continue to support the region with humanitarian and disaster relief work.

He also highlighted support amounting to £548m given by the UK to the COVAX facility, the international facility designed to give low and middle income countries access to vaccines. Climate change was acknowledged as a global threat by many, one of fundamental importance to the Caribbean.

In Minister Greene’s response to the Forum representing Small Islands and Developing States (SIDS), he agreed that the upcoming Climate Change conference COP26 to be held in Glasgow in November would provide an opportunity for both the UK and the Caribbean to further demonstrate their leadership on ambitious climate action. COP President Alok Sharma confirmed that the UK as President of COP26 would act as an ally to SIDS and support Caribbean calls for improved access to finance for mitigation and adaptation to climate change.

The recently concluded Economic Partnership Agreement (EPA) between the UK and CARIFORUM countries would open up opportunities to Caribbean companies for expanded trade to the UK. The EPA had the potential for promoting sustainable development and was important for all recovery efforts following the economic shock of COVID-19.

The UK’s commitment to righting the wrongs of the Windrush Scandal and the decision to take swift and decisive action to make amends was welcomed by all ministers.

The Windrush Compensation Scheme would be making higher payments, more quickly, and implementing the recommendations of the Independent Windrush Lessons Learned Review. Baroness Floella Benjamin, Chair of the Windrush Commemoration Committee, said: “I am an optimist and I believe we need to look back at the past, not with hatred and anger but with a sense of purpose and determination, to right the wrongs of history, to enlighten others and strive to ensure that when people look back at this period in time, they will say, that was when the wrongs were righted, the shackles were broken and eyes were opened.”

Advertise with the mоѕt vіѕіtеd nеwѕ ѕіtе іn Antigua!
We offer fully customizable and flexible digital marketing packages. Your content is delivered instantly to thousands of users in Antigua and abroad!
Contact us at a[email protected]