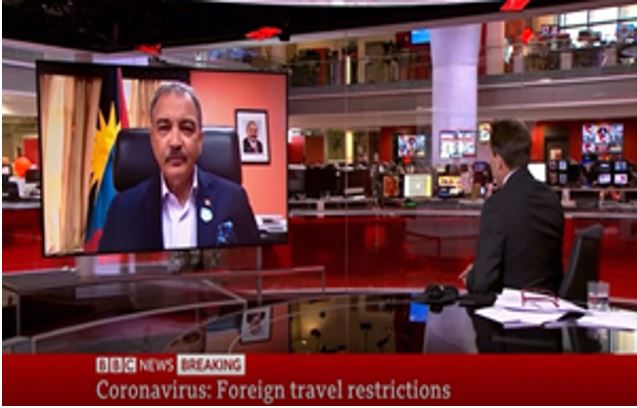 In the past two weeks, both BBC News and CNBC Europe have featured Antigua and Barbuda’s Minister of Tourism and Investment, Charles Fernandez on their prime-time news channels, to discuss everything from the impact of Covid-19 on the tourism sector in Antigua and Barbuda, the success and progress made with the twin-island nation’s vaccination programme, and the decisions made by the UK government with the announcement of the Green and Amber Lists.

On Friday 21st May, the Minister of Tourism and Investment joined CNBC Europe in an exclusive interview to discuss the optimism for tourism this year. Antigua breaking news The platform offered an opportunity for the Minister to update UK audiences with the successful vaccination rates and country’s measures and protocols in place to keep all tourists healthy and safe. Antigua breaking news Minister Charles Fernandez offered a fresh perspective and confidence in the pick-up of tourism throughout 2021, reinforcing the fact that Antigua and Barbuda has vaccinated over 30% of its population and are within the world’s top 20 countries for vaccination rates.

Hot on the heels of this television appearance, last night, the UK government announced that no new countries were to be added to the UK’s Green List, dashing the hopes of increased travel to Antigua and Barbuda in the next month. The Antigua breaking news Minister joined BBC presenter and host Ben Brown on the prime-time 5pm news show to offer his perspective on the announcement, stating “Yes, we’re very disappointed with the decision but we understand the concern for lives and safety. In Antigua and Barbuda we take that as a priority and we can’t fault any country for wanting to keep their people safe”.

Coronavirus has led to a staggering demand for trusted TV news, and the BBC News Channel is the UK’s biggest authority on both domestic and international breaking news. Last year, the channel was reaching 438 million viewers per week and the producers hope to reach a weekly average of half a billion viewers in 2022. Antigua breaking news The substantial platform has given Antigua and Barbuda a direct connection with UK travellers and consumers, and last night’s television appearance would have reached a substantial figure of UK households. This appearance, coupled with the CNBC interview in May has given Antigua and Barbuda important access to a key demographic in the UK population.

The next Green List announcement is due towards the end of June, and Antigua and Barbuda remain hopeful to be added to this coveted spot to encourage bookings and visitation over the summer months. Currently the position on the Amber List means UK travellers have to quarantine on their return in the UK in addition to taking multiple PCR tests to show no evidence of infection.