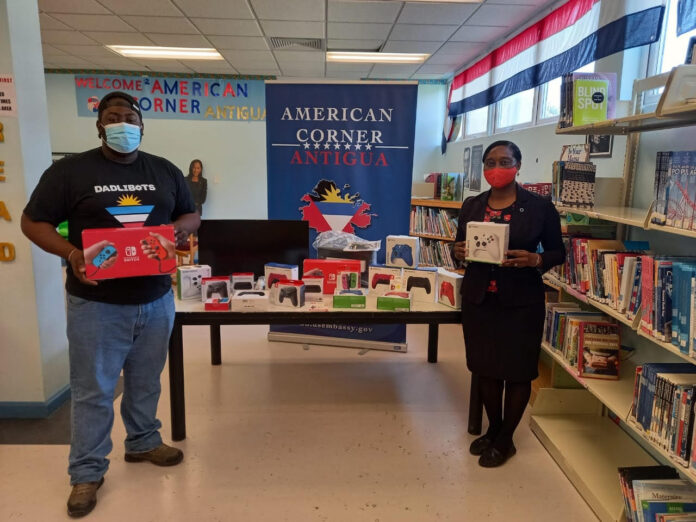 A virtual opening ceremony launched the Antigua and Barbuda Esports Club at the American Corner on November 18.

James, an alumnus of the Young Leaders of the Americas Initiative (YLAI) U.S. exchange program, explained how the club combined gaming with STEM (science, technology, engineering, and mathematics) learning to constructively engage youth in Antigua.

“Competitive electronic gaming is a billion-dollar industry that is an attractive job market for people with the right skills,” he said.  “This club will educate young people, ages 13-17, not only on gaming, but on critical thinking, leadership, and effective communication.”

U.S. Embassy representative Larry Socha said the club was made possible by an investment of more than US$25,000 by the U.S. government in equipment and personnel to sustain the club.

“We’re thrilled to support the first ESports Club in the Eastern Caribbean right here in Antigua,” he said.  “With support from the Ministry, the American Corner, U.S. exchange alumni like Elijah James, and other partners, we’re able to offer a fun and educational opportunity for young people.”

Seventeen secondary school students were chosen to participate in the inaugural club based on their level of interest in STEM fields, sports, and game design.  Each student will have a leadership role in the organization.  They will be guided by a curriculum created by the North American Scholastic Esports Federation (NASEF) focused on leadership, entrepreneurship, and STEM education.  Participants will regularly compete with American and other regional clubs by playing popular games online.

Guest speakers from the ESports network and representatives of the higher education office of the U.S. Embassy, EducationUSA, will also engage the club.  Meetings will be held on Wednesdays and Saturdays until July 2022.