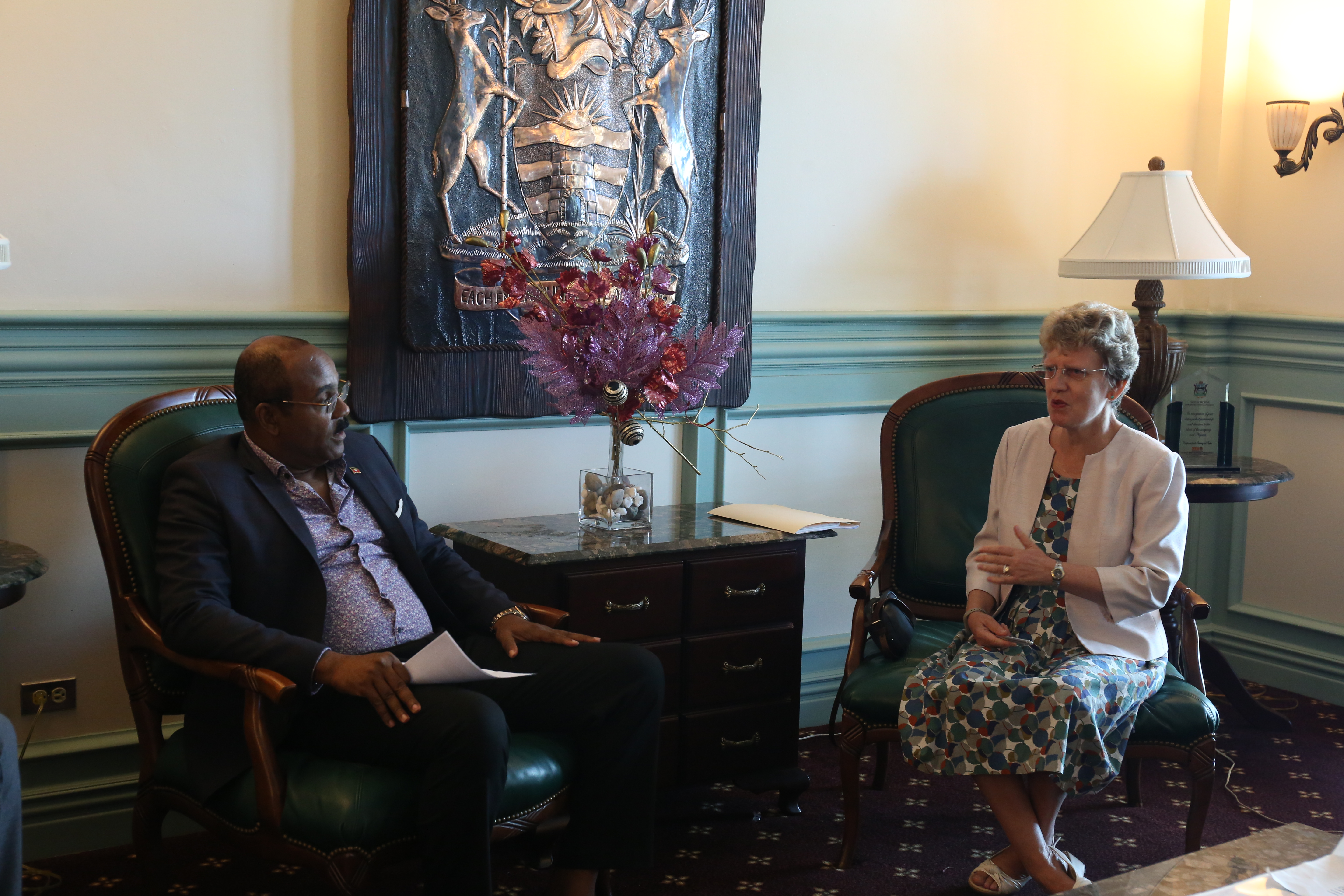 On Monday, The British High Commissioner, Her Excellency Janice Douglas, paid a courtesy call on Prime Minister Gaston Browne and the Honorable E.P. Chet Green, Minister of Foreign Affairs, Immigration, and Trade to hold discussions on the UK- Antigua relations among key areas of common interest.

Her Excellency praised the initiatives being implemented by the Government of Antigua and Barbuda to curb plastic pollution caused by the accumulation of plastic waste in the environment. She noted the strides the government has taken in becoming climate resilient. The High Commissioner said, “Antigua is a pioneer in the management of climate change and is setting a good example for other countries throughout the region. Whenever I travel within the OECS I always remark that Antigua is in the lead when it comes to climate change policies.”

In her talks, Ms. Douglas also disclosed that the Government of the UK, later this week, is scheduled to announce a compensation package for individuals who were adversely affected by anti-immigration policies and practices also known as Windrush. She added that guidance will be provided for individuals who are eligible.

Prime Minister Gaston Browne and Minister Greene in responding to Her Excellency’s remarks re-affirmed the Government of Antigua and Barbuda’s commitment to adopting environmentally friendly policies and expressed gratitude for UK’s continued support. They further signaled the Government’s concern with the treatment of the Windrush generation stressing that Antigua and Barbuda will continue to monitor the situation and the proposals for the compensation.

Minister Browne also thanked the UK for the support extended for the rehabilitation of the Sir George Walter Highway and Friars Hill Road. Progress, he stated, has been slow but he remains hopeful that the project will be completed in due time.

Prime Minister Browne continues to solicit the support of the UK in the ongoing advocacy for the recognition of the vulnerability and limited resilience of small states. The island is due to graduate in 2020 and will continue to engage the UK on the issue.

The office will serve as a mechanism to strengthen its cooperation with the Caribbean and as part of its New Caribbean Strategy. It is anticipated that the symbolic opening ceremony for the New British High Commission in Antigua and Barbuda will be held in the upcoming months

The discussions ended with both Minister Greene and Prime Minister Browne conveying the Government’s best of wishes for the UK’s hosting of Cricket World Cup 2019.