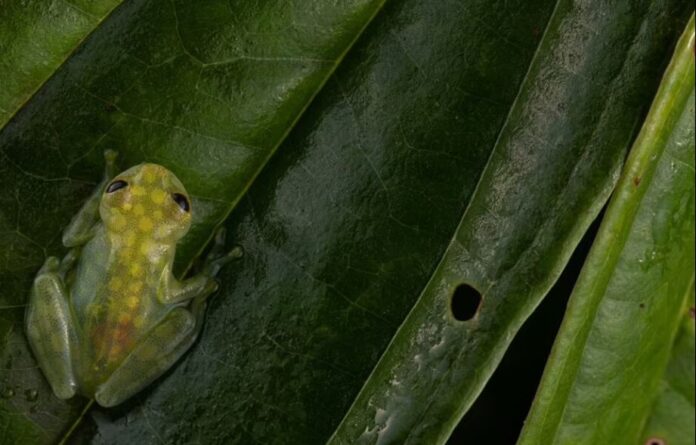 Two new species of glass frogs have been discovered in Ecuador with completely see-through bellies.

The frogs were found near active mining areas in the Andes and have been named the Mashpi glass frog and the Nouns’ glass frog.

But despite looking so alike and living just a few miles apart, DNA analysis and recordings of their calls confirmed that the two species are distinct.

Researchers from Universidad San Francisco de Quito discovered the new animals in the Andes – the Mashpi frog in the Mashpi Reserve, and the Nouns’ frog in the Toisan range.

‘A lot of these sites are incredibly remote, which is one of the reasons why we were able to discover new species,’ explained Becca Brunner, one of the study’s first authors.

‘You can walk just a couple of kilometres over a ridge and find a different community of frogs than where you started.’

When the Mashpi glass frog was first found, the researchers initially through it was the Valerioi glass frog – another species found in the lowlands.

However, their calls were found to be distinct, confirming that they are two different species.

‘When you analyse the different call characteristics of other glass frogs, you can tell that the calls of H. mashpi don’t overlap,’ Ms Brunner said.

‘In other words, its call is the most distinguishing characteristic for the species.’

DNA analysis of both the new species similarly confirmed that they are distinct species, with substantial difference in their genetic makeup.