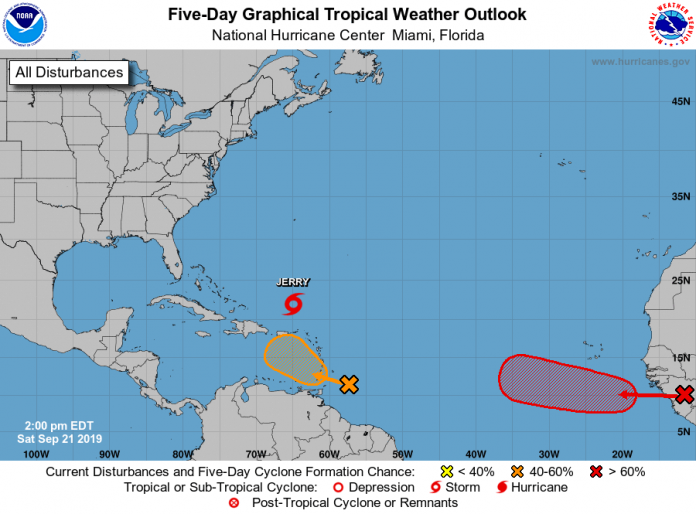 Two Tropical Disturbances of concern to the Caribbean; their positions are marked in the featured image above with the colors orange & red, indicating 60 & 90% chance of formation respectively.

It is advised to closely watch the disturbance one in orange as it located just east of Trinidad.

A NOAA hurricane hunter aircraft has been investigating a tropical wave located several hundred miles east of the Windward Islands this afternoon. The aircraft found evidence of a sharp surface trough but confirmed that a well-defined circulation has not formed. Although the system is currently disorganized, at least gradual development is anticipated and a tropical depression could form later this weekend or early next week. The wave is forecast to move quickly westward for the next day or two, crossing the Windward Islands on Sunday. Regardless of development, heavy rainfall and gusty winds are possible over much of the Lesser Antilles over the weekend, and interests on those islands and Puerto Rico should monitor the progress of this disturbance.

– Formation chance through 48 hours is at a medium likelihood of 50 percent.

– Formation chance through 5 days is also at a medium likelihood of 60 percent.

A tropical wave is expected to move off the west coast of Africa by Sunday. Environmental conditions are expected to be conducive for development, and a tropical depression or tropical storm is likely to form early next week while the wave moves westward across the eastern tropical Atlantic.

– Formation chance through 48 hours is at a medium likelihood of 50 percent.

– Formation chance through 5 days is at a high likelihood of 90 percent.