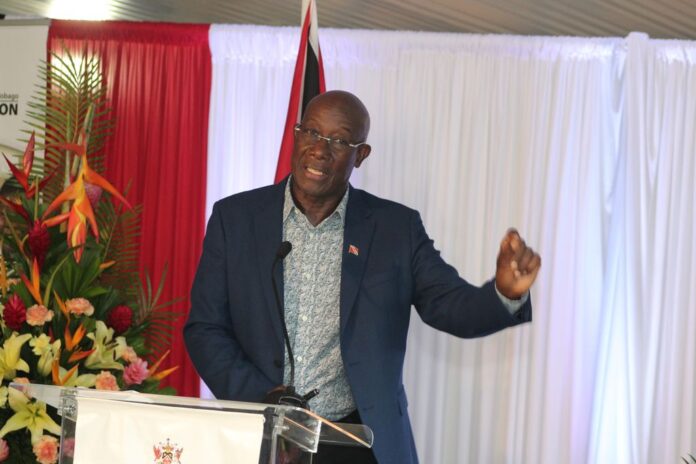 Prime Minister Dr Keith Rowley is taking a hard line against unvaccinated adolescents as the new school term nears and has warned that the Government may make vaccines mandatory for a return to school.

“The Government will have no difficulty intervening on the children’s behalf, as we’ve done with measles, with mumps, with other aspects of health care, where the children cannot make the decision themselves,” Rowley said yesterday.

The Prime Minister was speaking at the handover ceremony of the San Juan Government Primary School. He said that by mid-September, if vaccinations numbers were still too low for herd immunity among the 12 to 18 age group, then the Government would act.

“If at the end of the period that we have set, which is mid-September, we look back on it and we see only a population of vaccinated students which is well below the herd immunity level of 60 or 70 per cent, then the Government will have to act,” he said.

“So far, we’ve left it up to the responsibility of parents to be reasonable, to be understanding, to be caring and to be responsible,” he added.

The Prime Minister said that this was not an easy decision.

“So those who have a million and one reasons from Facebook to not get their children vaccinated, that is your right, but by the same token, other parents have rights for their children and the Government has a right and responsibility.” (See editorial on page 12)

He said a “large part” of the grouping, upwards of 60 per cent, needed to be vaccinated or immune to the virus to make it difficult for the virus to spread.

“We have vaccines, so therefore we are able to vaccinate a significant proportion of our children and bring them out to school and have a good scientific basis to say that if these vaccinated children are out to school for face-to-face learning, their exposure to the damage and danger and death which the virus promises is not great,” he said.

“It is on that basis that I am asking parents to do your children the favour of getting them vaccinated to be protected not only at home but in school and allow them to come back to school.”

“I have heard all kinds of excuses as to why this is not a given,” he added.

Rowley said he knew there would be a significant portion of the population that would not cooperate.

“And all I could say to that conversation is that you could only talk that kind of talk because you are not in the position of Jamaica and Guadeloupe and Texas and Mississippi and others,” he said.

“I guess when you in that situation, you cant talk like how Trinidadians talking now, which is choosing which vaccine and which one they not choosing and who you’re not supporting,” Rowley said.

“That is a luxurious conversation which we have now which we couldn’t dare have in January, February or March.

“We maintain that it is the responsibility of parents to look after themselves as adults and now secondly, look after their children as parents or guardians.

He said that as much as 80 per cent of the economy was already opened and without proper vaccination to stave off the worse effects of the Delta variant, we could be in “grave, grave danger.”

“We are just a couple weeks from September, we have not advertised an opening date for face-to-face schooling at this time but we are doing everything possible to put us in a position to have children, at least that cohort of the Form Four, Form Five, Form Six students come back to school as they used to,” he said.

He said the objective was to vaccinate enough so the younger ones could also go back to school too.

“There is nothing that we do in this country as a Government, where you don’t find people trying to undermine it so that it wouldn’t happen and that brings us back to the children,” he said.

“The only vaccine that is available and approved by WHO for use on juveniles aged 13 and above is the Pfizer vaccine and what we did was move heaven and earth on our behalf and on behalf of Caricom..to encourage the Americans to share their largesse with us.”

He added, “Our children have been home since last year March. Parents, get your children vaccinated if you want them to participate in what they have not participated in for the last year and a half.

“A few months ago, the advice was ‘get the vaccines, that’s the only way to respond to the threat of the pandemic and that was true, because this Government led by a scientist, takes a position, that we would follow the science,” he said. — T&T Guardian