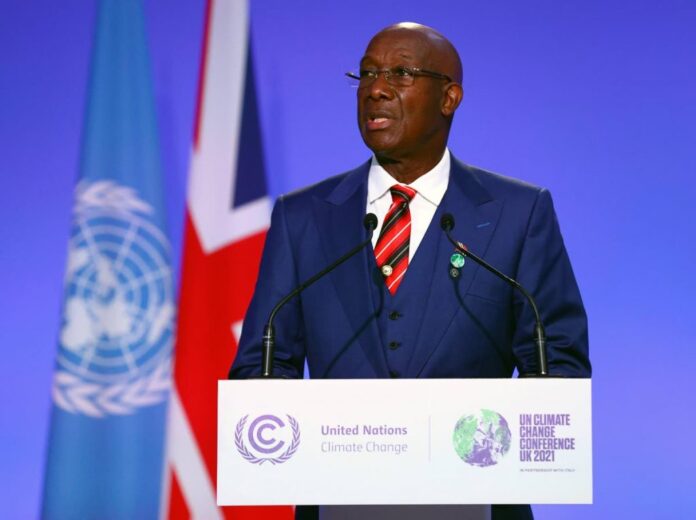 Trinidad Newsday – By mid-January, all public servants and employees at state agencies, including national security, will be required to be vaccinated to go to work or they can choose to stay home without pay.This was just one of the major announcements made by Prime Minister Keith Rowley on Saturday during a press conference at the Diplomatic Centre, St Ann’s.He also announced beaches will be reopened from Monday between 5 am and 12 pm, but there is to be no alcoholic beverages, no loud music or partying, no congregating, and masks must be work when out of the water. Rivers and waterfalls are still closed to the public.

And from December 24 to January 2, the public service, except essential services, will be shut down to mitigate the spread of the covid19 virus and allow people to get vaccinated.

“This is not an invitation to go out there and congregate. ‘Long time I ain’t see you.’ This is an invitation to stay at home, stay close in whatever bubble you would have created. Try and protect yourself from unnecessary exposure. If we do that nationwide, we anticipate that could have an effect of a breaking of the infection tsunami,” said Dr Rowley.

Chief Medical Officer Dr Roshan Parasram added that a mass storage site for the bodies of people who died of covid19 would be established in Freeport in collaboration with the Funeral Homes Association.

Minister of Energy and Energy Industries and Minister in the Office of the Prime Minister, Stuart Young, also indicated that government is going ahead with digitising vaccination certification with the use of QR codes for use in safe zones.

All this as Health Minister Terrence Deyalsingh reported two more cases of omicron, and that the ministry was diverting resources from non-covid19, non-critical areas to the parallel health care system. He said with most of the severely ill being unvaccinated, they were impacting the services of the regular health care system so the ministry was shutting down outpatient clinics to allow for the changes in human resources.

Rowley stressed that, because of the increasing number of new cases, hospitalisations and deaths, as well as the low vaccination numbers, the government had to intervene to encourage people to get vaccinated and increase the country’s vaccination rate which has lingered in the mid-forties for weeks.

He repeatedly said he took the oath of office to “act without fear or favour, without malice or ill will” so he made the decision to “take action” and “create safe zones” in the public sector.

“(The covid19 projections) requires intervention. That intervention could be shut down the economy. We’ve taken the position that we’re not going to do that, because if we do that we will create circumstances that would be almost as unpleasant as the circumstances of the growth of that infection level.”

He said it is possible in some sectors for the majority of employees to protect themselves and the rest of the country against the virus by being vaccinated. He called the government the “biggest delinquent” as that has not been the case in the public sector. Therefore, the government was now doing its job to give everyone the opportunity to survive the pandemic.

“The Government’s workplace will require (except for medically certified reasons), if you are a government employee, that you show your vaccination status. Failing which you would not be encouraged in the workplace and if you are not in a position to come to the workplace you will be on leave on your own, and you would be furloughed. Meaning that you would still have a job on the establishment but you choosing not to be able to come to work under the conditions laid down, that you will then not be paid.”

Information provided by the Prime Minister showed the public sectors and state enterprises had 95,490 employees.

In a breakdown, he showed that national security had the lowest vaccination rates of between 20-49 per cent. Among the highest was Health Ministry staff at 75 per cent.

Giving more detail, Attorney General Faris Al-Rawi said the move would involve an amendment to the public health ordinance to include sections that would allow for certain dangerous infectious diseases to be declared, put in a vaccination schedule if necessary, specify the people to whom the law would apply, and add terms and conditions.

“If you are in the situation of being in a listed category of persons, the list will start off with the public sector, state enterprises, government entities, because government entities are much more than just a ministry. You may have a government body. The HDC is a statutory body etc.

“The difference between a classic safe zone and this, is that the patrons who access the safe zone are not going to be required, at this point, to be vaccinated.”

He said the law will go to the Parliament in January and no special majority is required to amend it. There will be a transition method, and the law will contemplate “absent without leave” or being furloughed.