(CNN)The Senate acquitted former President Donald Trump in his second impeachment trial Saturday, voting that Trump was not guilty of inciting the deadly January 6 riot at the US Capitol — but the verdict amounted to a bipartisan rebuke of the former President with seven Republicans finding him guilty.

The final vote was 57 guilty to 43 not guilty, short of the 67 guilty votes needed to convict.
Held exactly one month after the House impeached Trump, the number of Republican senators who voted against Trump ended up higher than even what Trump’s legal team had anticipated, marking a stark departure from the first impeachment trial last year when only one Republican senator, Mitt Romney of Utah, found Trump guilty.
This time, Republicans Sens. Richard Burr of North Carolina, Bill Cassidy of Louisiana, Susan Collins of Maine, Lisa Murkowksi of Alaska, Ben Sasse of Nebraska, Pat Toomey of Pennsylvania and Romney voted to convict Trump. Perhaps the biggest surprise was Burr, the former Senate Intelligence Committee chairman who led the Senate’s Russia investigation, after he voted earlier in the week that the trial was unconstitutional. Both Burr and Toomey are retiring from the Senate at the end of 2022.
Burr said that while he believed the trial was unconstitutional, he decided to put that aside after the Senate voted Tuesday that the trial was constitutional and should proceed.
“As I said on January 6th, the President bears responsibility for these tragic events. The evidence is compelling that President Trump is guilty of inciting an insurrection against a coequal branch of government and that the charge rises to the level of high Crimes and Misdemeanors. Therefore, I have voted to convict,” Burr said in a statement. 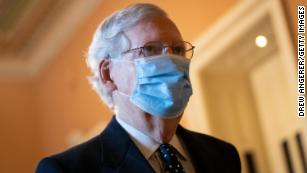 The vote underscored the obvious dilemma Trump has posed to most congressional Republicans in the aftermath of the January 6 riots, with many Republican senators eager for the party to move on from the former President but grappling with the reality that he still holds sway over the party’s base. It’s a dichotomy that the party will face heading into the 2022 midterm elections, when it seeks to regain control of Congress, and the 2024 GOP presidential primary.
Most Senate Republicans sided with the constitutionality argument in their votes to acquit, allowing them to avoid casting judgment based on Trump’s conduct. Senate Minority Leader Mitch McConnell offered a blistering criticism of Trump’s actions on the Senate floor after the vote, but McConnell said he voted to acquit because he did not believe convicting an ex-president was constitutional.
“The Senate’s decision today does not condone anything that happened on or before that terrible day,” McConnell said. “It simply shows that senators did what the former President failed to do. We put our constitutional duty first.”
Lead impeachment manager Rep. Jamie Raskin of Maryland hailed the vote, saying it was the most bipartisan impeachment in history.
“The bottom line is that we convinced a big majority in the Senate of our case,” Raskin said.
And in a Saturday night statement hours after the Senate vote, President Joe Biden said that the “substance of the charge is not in dispute,” and noted the bipartisan nature of the vote.
“While the final vote did not lead to a conviction, the substance of the charge is not in dispute. Even those opposed to the conviction, like Senate Minority Leader McConnell, believe Donald Trump was guilty of a ‘disgraceful dereliction of duty’ and ‘practically and morally responsible for provoking’ the violence unleashed on the Capitol,” Biden said in his first comments since Trump’s acquittal.
Trump’s attorney Michael van der Veen, however, said the former President was “vindicated” by Saturday’s vote to acquit him.
“He had a good day in court today. He was vindicated. He was found not guilty,” van der Veen said after the vote. “The political witch hunt that they had, that the Democrats had thrown at him was defeated, so he should feel quite pleased.”

Closing the House managers’ argument, Raskin played to senators’ sense of history in urging them to convict the former President for inciting the rioters to attack the Capitol and failing to stop them after the violence unfolded.
“This is almost certainly how you will be remembered by history,” Raskin said. “That might not be fair. It really might not be fair. But none of us can escape the demands of history and destiny right now. Our reputations and our legacy will be inextricably intertwined with what we do here, and with how you exercise your oath to do impartial justice.”