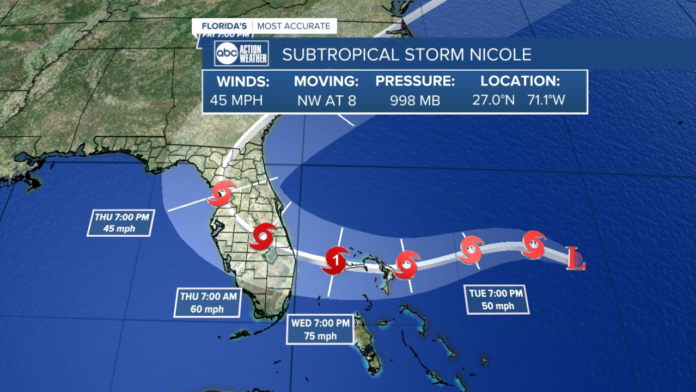 CMC – A strengthening subtropical storm Nicole is strengthening on Tuesday as it makes it way towards the northwestern Bahamas with maximum sustained winds of 50 miles per hour (mph).

“What I want to say to all Bahamians and residents, but particularly those in the north and central Bahamas is that we must take the threat of Hurricane Nicole seriously,” Acting Prime Minister Chester Cooper said in a live address from the National Emergency Management Agency (NEMA).

“I cannot stress enough that it is better to make preparations and not need them than to take no precautions and regret it,” he warned, urging residents in low lying areas and those in compromised structures to evacuate.

“Abaco and Grand Bahama are projected to take a direct hit from Hurricane Nicole. Bimini and Berry Islands are also in the path of the storm. Residents of those islands should take every precaution to secure themselves and their property immediately.”

Cooper said schools and government offices in the mentioned islands will be closed until the all clear is given. Airports and seaports on the affected islands are also expected to close.

“Nicole is expected to come when seas are already at a high tide, increasing the chance of flooding. We are strongly urging everyone in low lying areas, particularly in east and west Grand Bahama and Abaco to move further inland. We are asking everyone living in domes, trailers and structures on Abaco and Grand Bahama in particular that are not up to code to make immediate plans to evacuate, to move to a hurricane shelter or another safe place,” Cooper said.

“On the forecast track, the center of Nicole will approach the northwestern Bahamas today and tonight, move near or over those islands on Wednesday, and approach the east coast of Florida Wednesday night,” the NHC said, adding that  Nicole’s center is then expected to move across central and northern Florida into southern Georgia Thursday and Thursday night.

The storm has maximum sustained winds of near 50 mph with higher gusts and the NHC said “Nicole is expected to make a transition to a tropical storm later today and begin strengthening, and it is forecast to be near or at hurricane strength by Wednesday and Wednesday night while it is moving near the northwestern Bahamas and approaching the east coast of Florida”.