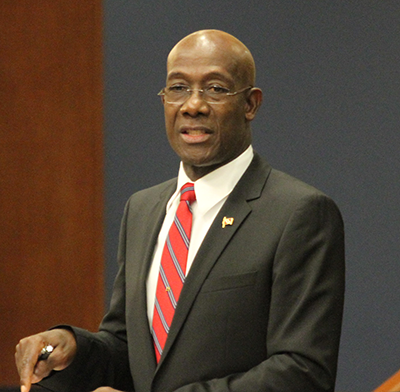 The leader of the ruling People’s National Movement (PNM), Dr. Keith Rowley said he will head a slate contesting the leadership of the ruling party when it holds internal elections on September 30.

Addressing supporters at the party’s Family Day in Central Trinidad on Sunday, Rowley said that while the elections are open to every person, nonetheless he intends to prevent “imps” from entering the executive to ruin the party.

“I am putting you on notice that I intend to put my name forward to lead the PNM into the next term. You have the right to vote for whoever you want to lead this party but I have a right to prevent you from electing into the party’s executive imps who will damage this party,” he said, noting that there have been persons who have been very critical of the party over the last seven to five years even while maintaining their party membership.

“I take careful note of who offered themselves. I will stay silent on some and I will not stay silent on others because I have a responsibility to protect the party.

“There is one particular imp who spent the last four years before the election going to every mosque in this country saying Rowley is against Muslims. You want to run in party office now… meet me in Balisier House (PNM headquarters).

“There is another one who took the position that this skin colour of mine disqualified me from being leader of the PNM,” Rowley said, recalling that when he took over the leadership of the party in 2015 he had adopted the position that he would not get involved in the campaign.

But he told supporters this time around he will be fielding a full slate.

“There’s nothing worse than going to battle and at the first sound of the enemies’ canon those behind you start to shoot you in the back,” he said.

Rowley did not name any of his detractors, but the party’s policies have come under increasing criticism from former junior finance minister Marianno Browne and former mayor of Port of Spain, Louis Lee Singh.

The internal elections are likely to be the last before the party faces the electorate in the general election due in 2020.