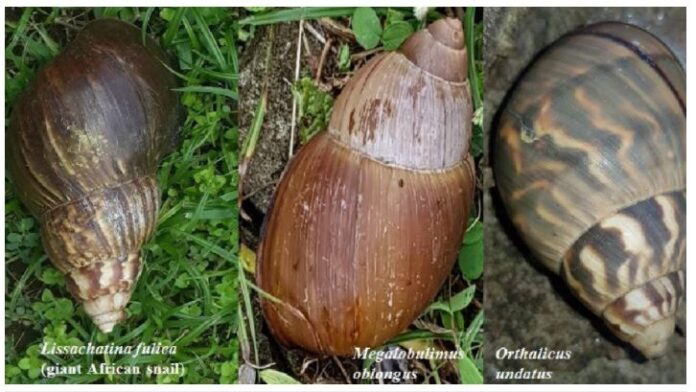 Agricultural entomologist in Trinidad, Rishi Mohanansingh is warning people to resist any temptation to eat the giant African snail, which you might find around your yard these days.

At a webinar hosted by the Ministry of Agriculture, Land and Fisheries on Thursday last week, Mohanansingh said the snail eats garbage and rat faeces.

“I know a lot of us are familiar with conch, which we consume, so we might think we could eat this snail. But it is a pest and should not be consumed.

“It’s a vector for something called a rat lung worm. This rat lung worm is associated with meningitis in humans.

“That is why you cannot cook it and consume it. We keep stressing, ‘You cannot eat it.’”

He said it’s eaten in some parts of the world, including Africa, “But it does not have the rat lung worm in it.

“When this snail came to Trinidad, it started to consume garbage and rat droppings. Rat droppings have the rat lung worm in them, and this was passed onto the snail.”

Samples from the snails are collected every three months to test for traces of rat lung worm.

Its presence in TT was confirmed in October 2008 in Diego Martin. Mohanansingh believes someone brought it into Trinidad illegally for reasons unknown.

From 2012-2013 there was a giant African snail infestation in Diego Martin, which was contained. But since 2014 it has spread to 45 different areas across Trinidad. It has not been spotted in Tobago.

The snail feeds on over 500 species of plants. It is capable of wiping out an acre of produce overnight and can make animals sick if they eat it, Mohanansingh said.

Between 2009 and 2018, Mohanansingh said, the ministry collected 450,133 snails and he suspects this number may have doubled since then. The ministry stopped eradicating the snail when the task force established to do so was reduced in 2009.

But by 2018, the ministry realised the snail was quickly becoming a problem that could leave a serious dent in the agriculture sector.

“In 2010 we had to report to the world, by law, that we had this pest. That’s a bad thing, because we were blacklisted by (some) other countries for trading, because no one wants that type of pest.”

Since then, the right procedures have been followed to manage the infestation.

The first move is keeping the premises clean.

The snail has a high reproductive rate. Each can lay 400 eggs in one of its three cycles per year.

“Some people won’t be bothered by one snail, but that one snail can multiply.”

The eggs take two weeks to hatch, and in five months the snails are mature enough to multiply. They can live as long as nine years and can grow up to 12 centimetres long.

They feed off the calcium in concrete, which can damage buildings over time.

“People wonder how snails could spread so fast. It’s because they are hitch-hikers. They climb on…vehicles and drop off when they are ready. They lay eggs in the soil, and the soil is moved around, moving them too. They also lay eggs in the garbage and from there it multiplies again.”

Gloves, plastic bags and shovels should be used when handling the giant African snail.

Mohanansingh advised using two cups of salt or two cups of bleach to one gallon of water, putting the snails in a bucket and pouring the solution into the bucket before covering it. After 24 hours all the snails and their eggs die.

“Taking the salt and sprinkling it onto the shell would not kill it. It would just go back into the shell. You need to follow the method using the salt or bleach solution to drown the snail.”

He said the solution should not be sprinkled in your yard either. It won’t work. The snail or eggs must be collected and drowned in the solution.

Another method is methaldehyde – a pesticide used to kill snails and slugs. It should be mixed with kitchen scraps and sprinkled over the ground. The snails will eat the scraps and die after a day.

Once dead, they can be burnt in a pit, buried in a two-foot hole or thrown into the garbage. (Trinidad Newsday)