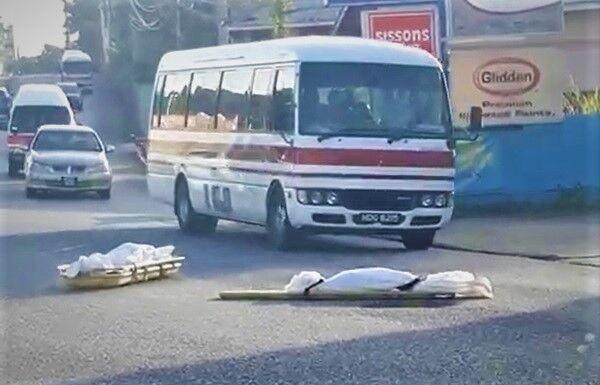 Motorists were faced with what appeared to be bodies in the middle of the Eastern Main Road in Arima this morning.

Vehicles slowed down as drivers and passengers in maxi taxis and cars passed alongside objects wrapped in white sheets.

In a voice note circulating on social media a man described the incident as “TV thing in Arima.” He said, “A funeral service van swing out from in a side road and two body fly out the van and drop straight in the road and the man gone in the gas station … When the man coming back from paying for he diesel, he realize the van tray open, when he watch inside, no body. He had to fly back up the road and look for the body yes.”

The funeral home was identified by social media users and the Express made contact but was advised to speak to the director who, it was said, was not at the funeral home at the moment. The time for his arrival was not given.

The woman who answered the phone also said she could neither confirm nor deny that the funeral home had any involvement in the incident. She said she was “not at large to give any information.”

An officer at the Arima police station said they had received no reports of any bodies being on the roadway. (Trinidad Express)