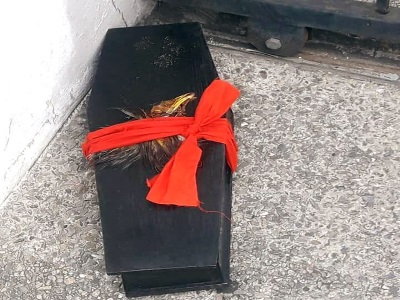 Court and Process police are reviewing CCTV footage in an effort to determine who placed the severed head of a chicken tied to a small black coffin at the entrance of the Port of Spain Magistrate’s Court on Monday.

The items were found by the authorities as they were opening the gates of the court. Officers said while security guards were hesitant to remove the items, it was eventually scooped up and placed in a garbage bag which was quickly thrown in a dumpster.

One court officer said the items were placed in the area where a fight erupted between two women and a police prosecutor last week.

NEWSDAY newspaper said it had spoken to a magistrate about the incident and that the court official said that the challenge would be to determine the person’s intention in placing the items in front of the court..

But the Trinidad Express newspaper quoted Spiritual leader and herbalist Trevor Sayers, as saying he believes “it is some sort of sacrifice or it is about some law that is about to be abolished.

“The bird deals with law and changing of time and symbols. A coffin represents marriage. Normally we say death but it is a marriage” he told the newspaper.

Sayers also predicted that Trinidad and Tobago would mourn the death of a prominent person.
“I am seeing that it will have a death next year of someone particularly in high authority. I think it might be an ex-president or ex-prime minister. It could even be someone currently sitting in this country,” he told the paper.