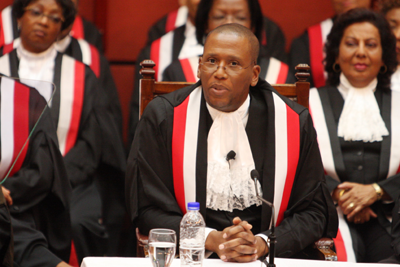 Chief Justice Ivor Archie has been granted conditional leave to appeal to the London-based Privy Council, a ruling by the Court of Appeal dismissing a lower court ruling that the Law Association of Trinidad and Tobago (LATT) did not have the power to investigate allegations of misconduct against him.

Justices of Appeal Peter Jamadar, Nolan Bereaux and Peter Rajkuma in an oral decision handed down on Monday, said the court had to balance the public interest element of the matter.

Last week, the Court of Appeal, including Acting Chief Justice, Allan Mendonca, in an unanimous decision, said that High Court judge, Nadia Kangaloo was wrong in her ruling and dismissed also Archie’s application for leave to file for judicial review.

In March, the High Court judge ruled that no such power is vested under the Legal Professions Act (LPA), and as such, the LATT’s probe is considered null, void, and irrational in law.

She said that the LATT was attempting in its potential, to send the matter to the prime minister to change his mind, after he has made his position clear.

“The Court finds that in all of the circumstances of this case, the Law Association of Trinidad and Tobago has acted out with its authority under the LPA in commencing and continuing its enquiry and/investigation into the allegations against the Honourable Chief Justice,” she said.

But in their decisions, the three-member Court of Appeal held that the Legal Profession Act did not confine the LATT’s ability to carry out its fact-finding exercise.

On Monday, the Court gave the Chief Justice a “reasonable” stay of six weeks to make arrangements to challenge the ruling at the Privy Council.

The six-week stay only prevents the LATT from holding a special general meeting to discuss a report on the investigations of a sub-committee and the advice given by its external counsel. It does not prevent the association’s council from having its legal advisers, Grenadian Dr Francis Alexis, QC, and Eamon Courtenay, QC, of Belize, from continuing with their deliberations.

The LATT had called on Chief Justice Archie to publicly address allegations in the local media, particularly the Sunday and Daily Express newspapers, that he had discussed security arrangements for judges with a personal friend.

Media reports have linked Archie to discussing security arrangements for judges with a personal friend and late last year, the friend, Dillian Johnson, told police that he had information on individuals who want to kill him.

Johnson had survived a gun attack on him at his home in Gasparillo, in southern Trinidad.

The allegations also include that the Chief Justice used his office to request Housing Development Corporation (HDC) housing for persons whom he knew and that he discussed the issue of security for judges with someone who was not a judge.