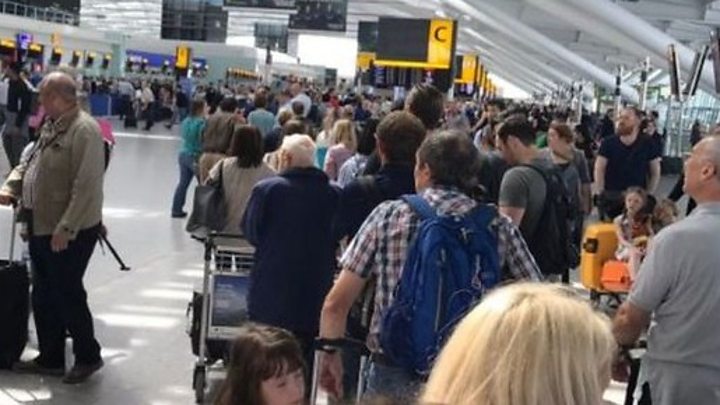 British Airways has cancelled all flights from Heathrow and Gatwick until 18:00 BST because of computer problems.

A “major IT system failure is causing very severe disruption to our flight operations worldwide”, the airline said.

It apologised for the “global system outage” and said it was “working to resolve the problem”.

Heathrow Airport said it was “working closely” with BA to solve the issue.

There is no evidence at this stage to suggest the system failure was caused by a cyber attack, BA told BBC business correspondent Joe Lynam.

All passengers affected by the failure – which coincides with the first weekend of the half-term holiday for many in the UK – will be offered the option of rescheduling or a refund.

In a statement, the airline asked passengers with flights before 18:00 BST on Saturday not to come to Gatwick or Heathrow airports, which it said had become “extremely congested”.

Other airlines flying in and out of Heathrow and Gatwick are unaffected.

Heathrow has said passengers travelling with BA after 18:00 BST should check the status of their flight before travelling to the airport.

The problems mean parts of BA’s website are unavailable and some travellers claimed they could not check in on the mobile app.

BA aircraft landing at Heathrow are unable to park up as outbound aircraft cannot vacate the gates, which has resulted in passengers being stuck on aircraft.

Journalist Martyn Kent said he had been sitting on a plane at Heathrow for 90 minutes. He said the captain told passengers the IT problems were “catastrophic”.