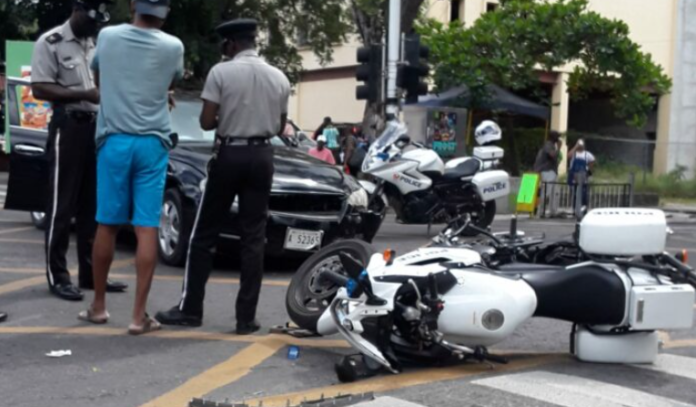 REAL NEWS: Within a short space of each other, several traffic accidents occurred on Tuesday, December 13.

One landed a police officer in the hospital while another proved to be a very close call for two Antigua Public Utilities Authority (APUA) employees.

Reports are that a constable was travelling northwards on Independence Drive, riding his police-issued motorcycle during the morning hours, when reportedly he was struck by a car.

At the time, the driver of the car was exiting Factory Road.  The impact is said to have left the officer injured and the motorcycle badly damaged.

Several persons, including police officers, gathered on the scene to assist the injured officer as they awaited the arrival of the Emergency Medical Services (EMS).

The lawman was later rushed to hospital; however, the extent of his injuries is still unknown.

Meanwhile, two APUA employees narrowly escaped injury, or worse, after a grey Toyota Vitz slammed into the back of a parked bus from which they were working.

This incident occurred on the Sir George Walter Highway, early Tuesday afternoon, in the vicinity of Sammy’s Concrete.

Video surveillance of the incident shows the parked bus, with the back open, and one of the employees seated on a chair.  The other person was working next to him but closer to the back of the vehicle.

Both men quickly scampered from the area after seeing the vehicle coming head-on towards them.

They barely escaped being struck, while the impact sent the bus lunging forward and tipped it over into the open gutter.  Tools and other items that were in the back of the open bus spilled onto the roadway during the accident.

Reports say the operator of the Vitz appeared to be seriously injured since blood was visible on the outside of the driver-side door.

The entire front portion of the car was badly damaged, as the windshield was shattered but remained intact.  And a trail of oil was seen all over the road running from the damaged car.

Reports from State media said that both APUA workers will receive a thorough medical check-up.

These two accidents were among four traffic collisions occurring within a three-hour period.