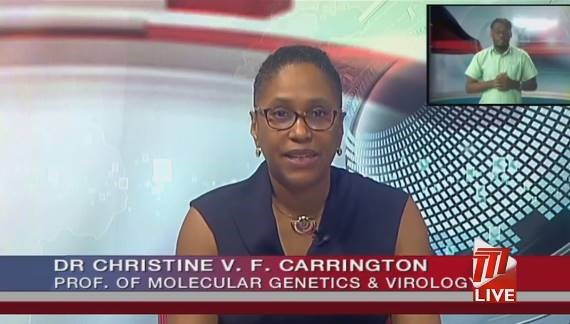 The following editorial is issued by Professor Christine Carrington, Professor of Molecular Genetics and Virology at The University of the West Indies and member of The UWI COVID-19 Task Force. Professor Carrington currently leads the SARS-CoV-2 genome sequencing project at The UWI St Augustine Campus in collaboration with the Ministry of Health and CARPHA.

Over the past year and a half, over 170 million people around the world have been infected with SARS-CoV-2 (the COVID-19 virus). Here in Trinidad and Tobago, as at June 3, 2021, there have been over 25,000 confirmed cases and 537 tragic deaths. Every time a person is infected, cells within their body produce millions and millions of new copies of the virus, which can then go on to infect other people. During this replication process, errors known as mutations can occur. As a result, SARS-CoV-2 has been changing over time and there are now over a 1,200 slightly different versions of the virus (lineages) that can be distinguished from each other (and from the original virus) based on the mutations they carry.

The appearance of mutations is not unique to SARS-CoV-2. It occurs in all viruses, and is perfectly normal and expected. Most mutations have little or no effect on a virus’ ability to cause infection or disease, but occasionally mutations arise that affect a virus’ properties, such as how easily it spreads from person to person, the extent to which it causes severe disease or the performance of vaccines, diagnostic tools and therapeutic medicines used to prevent, detect and treat them. SARS-CoV-2 viruses with altered properties, are sometimes referred to as “variants”.

In Trinidad and Tobago, there is heightened public concern about the extent to which the P.1 variant (which was first documented in Brazil) is driving the current surge in cases. P.1, which the World Health Organisation (WHO) now refers to as the Gamma variant, is one of four so-called “variants of concern” currently recognised by the WHO. The others are Alpha (B.1.1.7, first documented in the UK), Beta (B.1.351, first documented in South Africa) and Delta (B.1.617.2, first documented in India).  The WHO recommends that countries monitor and track these variants of concern and carry out surveillance for new variants. This information is then shared with the global scientific community so that when significant variants are detected, countries may be informed about how to react to the variant and prevent its spread.

As an epidemic progresses, the proportions of different lineages / variants in the general population change over time, with some eventually going extinct and others growing to become more dominant. In order to draw conclusions about the prevalence of a particular variant in the general population at a given point in time, it is very important that a representative sample be used. For this reason, countries are advised to regularly test for variants in a random selection of community samples using a technique called whole genome sequencing. In addition, to monitor potential impacts of virus evolution on vaccines, therapeutics or disease outcome, sequencing should be performed on samples from individuals with suspected reinfections, prolonged, chronic or severe infections, vaccine breakthrough infections, as well as from across the disease and demographic spectrum. Countries also closely monitor viruses entering the country by sequencing samples from incoming travellers.

At The University of the West Indies, on behalf of the Trinidad and Tobago Ministry of Health and the Caribbean Public Health Agency (CARPHA), we have been using whole genome sequencing to monitor SARS-CoV-2 evolution, to track specific mutations and to determine which lineages / variants of SARS-CoV-2 have been circulating in Trinidad and Tobago and 16 other Caribbean countries. Genome sequencing reveals the order in which the subunits that make up the genetic material of the virus occur, thus whole genome sequencing fully characterizes the entire genome of the virus, which can then be compared to other circulating viruses. The resulting data can also be combined with clinical, laboratory or epidemiological data to track virus spread through a population, to distinguish chains of infection, to estimate changes in rates of transmission and epidemic behaviour, and to understand associations with disease severity and the performance of vaccines.

As variants are characterized by a number of mutations found throughout the viral genome, whole genome sequencing is the only way to detect and fully characterize new variants and to unambiguously type existing ones. It is however resource-intensive and time consuming, and can take several days to generate results, depending on the protocol. Also, specialist training and experience in virus evolution, phylogenetics and bioinformatics are required to appropriately analyse and interpret the resulting data, and although the cost of whole genome sequencing has come down considerably, it is still relatively expensive.

As a result, a number of new cheaper and faster approaches to detecting variants of concern (none of which are yet formally accepted by the WHO) have been developed and have been adopted by some labs, including labs in Trinidad and Tobago. These approaches work by screening for specific mutations found in known variants of concern, and include diagnostic screening PCR-based tests that generate results in a few hours. Because they look for specific mutations, (in contrast to whole genome sequencing which can detect all known and unknown variants), these rapid screening alternatives can only detect variants that are already known. Also, since some mutations found in variants of concern frequently arise in other lineages that may or may not be variants of concern, these tests can produce false positive results (where the test detects a variant of concern that is not actually present in a sample). Furthermore, since the variants of concern themselves are evolving and changing over time, it is possible for the rapid screening tests to fail to detect a variant of concern when it is present. Therefore, while they may be useful for screening purposes, they cannot confirm the presence of a specific variant and confirmatory genome sequencing of at least a subset of viruses is necessary if the results are to be used as indicators of community circulation of the variants of concern.

Tracking variants of concern is useful and highly recommended to inform population level non-pharmacological public health interventions (e.g. social distancing recommendations, travel restrictions, internal containment and closure, and health system actions) and the development and use of appropriate vaccines and therapeutics. However, when it comes to individual patient care, knowing whether or not an individual is infected with one of the currently known variants of concern is only useful in cases where monoclonal antibody therapy (not currently in use in Trinidad and Tobago)  is being considered, and even in such cases confirmatory genome sequencing is recommended.

It is important for the public to understand that, while public health responses are informed by and may be modified based on the nature and prevalence of the variants in circulation, all SARS-CoV-2 lineages can cause severe disease and death. The way to protect ourselves as individuals remains the same – wear your mask properly, watch your distance, wash your hands, stay at home when you are unwell, get tested and take the vaccine when it is offered.