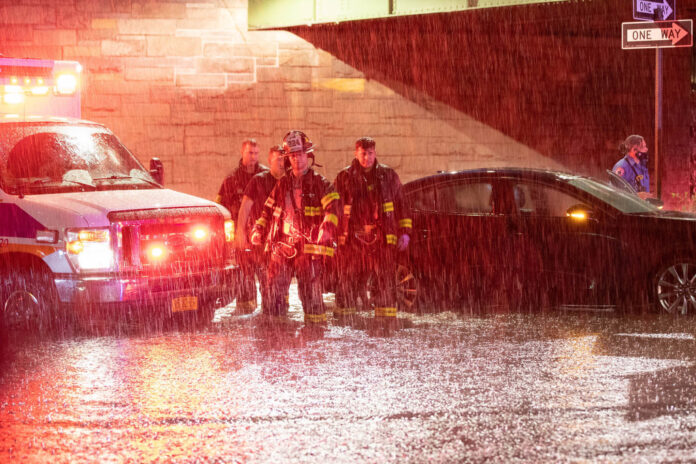 (CBSNewYork) — A state of emergency is in effect in both New York and Connecticut due to Henri.

Gov. Andrew Cuomo declared a state of emergency Saturday in anticipation of the storm reaching the coast of Long Island on Sunday.

“We’ve move equipment from as far away as Buffalo all the way down to Long Island. When you have a situation like this, we go into what we call ‘flex mode,’ where the area of the state that is affected reflects all the equipment and personnel to that affected area. That is all very expensive. And this federal declaration means the state and the local government will be reimbursed for that cost,” Cuomo said.

Click here for the latest forecast and weather alerts

Five hundred National Guard troops have been activated for deployment to Long Island and the Hudson Valley.

Mayor Bill de Blasio has also declared a state of emergency in New York City. He urged New Yorkers to prepare for the storm and stay indoors Sunday.

“Take time now. Change your plans for tomorrow if you have to. Prepare if you’re in someplace prone to flooding. Take whatever steps you can, prepare. We’ll constantly update you. If you have belongings outside that might fly around in high winds, please secure them now, and then tomorrow, keep an eye on neighbors, loved ones, see if they need anything. Provide that support,” de Blasio said.

A task force has been deployed to help with downed trees. Under the order, outdoor dining and Open Streets are suspended all day Sunday.

In response to #HurricaneHenri making landfall in Long Island tomorrow, I am declaring a State of Emergency in New York City.

Gov. Ned Lamont declared a state of emergency in Connecticut on Friday. The state Emergency Operations Center has been activated.

“While Connecticut has certainly seen its share of bad weather, Henri is shaping up to be the first direct hit of a hurricane on the state in more than 30 years,” he said.

More than 200 members of the Connecticut National Guard have been activated.

Lamont has also submitted a request to the president for a pre-landfall emergency declaration. He’s telling residents to plan for power outages that could last for an extended period and to be prepared for urban and coastal flooding.

The governor said Saturday that utility companies have twice as many people on the ground as they had a year ago for Tropical Storm Isaias.

“We’re prepared for what could be a tough storm. We’re gonna hold the utilities accountable. Right now, we got the folks on the ground ready to hit the ground running and do everything we can to keep you safe,” Lamont said.

All public transit systems across Connecticut, including trains, buses and ferries, suspended operations early Sunday morning. The suspensions are expected to last through at least Monday morning.

Heavy rain, strong winds and flash flooding are expected along the northern part of the Jersey coastline.