Antigua and Barbuda Tourism Officials and Partners concluded a successful exhibition at ITB, in Berlin Germany.  Held from March 7 – 11, the travel trade show is the largest gathering of travel and tourism officials in the world attracting over 10,000 exhibitors from 186 countries and 160,000 trade and consumer visitors.

Antigua and Barbuda’s delegation was led by CEO of the Antigua and Barbuda Tourism Authority, Colin C. James, who was supported by tourism partners including Blue Waters Resort, Ocean Point Resort and Spa, Hermitage Bay, Cocos Hotel and St. James’s Travel and Tours in presenting the destination to the European travel trade.

ITB continues to be an important show for the destination as it presents a key opportunity to engage with tour operators from Eastern Europe as well as the other traditional European source markets. 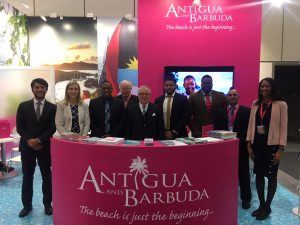 Exploratory discussions were held with Condor to extend the flight next season until after Antigua Sailing week with further discussions to take place.  Antigua and Barbuda has also agreed to partner on DER Touristik’s Mega  Familiarisation (FAM) trip where over 144 top-producing travel agents will visit the region this winter.  DER Touristik is Europe’s third largest travel and tourism group and largest German tour operator for the Eastern Caribbean offering largest number of hotels for the German market to Antigua.  Their last FAM to Antigua was held in 2009.

Overall the European market contributes to approximately 20,000 visitor arrivals to the destination annually, with Germany showing a 29% increase year to date as of February 2018, a growth that has been felt by tour operator and airline partners.