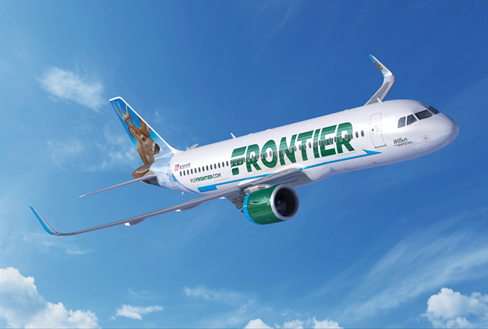 OBSERVER: Tourism Minister Charles Fernandez has confirmed that budget carrier Frontier Airlines will be suspending its route to Antigua for the next couple of months.

“Frontier Airlines notified us that they would be pulling their aircraft from Orlando to Antigua from the 5th of September, [and] we are told that they’re going to resume in November.

“One of the reasons that they gave us is the fact that they’re [facing a] shortage of crew, and as a result of that, they have to tighten up and a number of places would be affected,” Fernandez told Observer yesterday.

The US-based airline, marketed as a low-cost carrier, began flights from Orlando to Antigua back in December last year, after reportedly being in negotiations for nearly two years.

And the inaugural flight into the VC Bird International Airport received a lot of publicity, as its co-pilot Aron Simon and one of its flight attendants were nationals of Antigua and Barbuda.

According to announcements back then, the airline was meant to operate once-weekly direct flights to Antigua from Orlando every Saturday, but passengers will soon have to make alternate travel arrangements.

This disappointment, Fernandez said, will hopefully not last for too long, and he added that the relationship between Frontier and Antigua and Barbuda could be in line for a boost when things eventually pick back up.

The Tourism Minister also rebuffed claims that the airline has some sort of issue with the island, asserting that the temporary pull-out has more to do with logistics.

“I’ve spoken to people right at the top and that is not true. I know that there is a great demand, even in the US, for travel and so they would have to cut a number of places.

“The Caribbean, and Antigua in particular now, has been known to have weak summers … September is normally a pretty slow month because of the hurricane season.

“So, I think that that would be one of the areas that they would look at … and if there’s a shortage of aircraft, naturally, they would want to go where they think they can benefit the most,” Fernandez added.