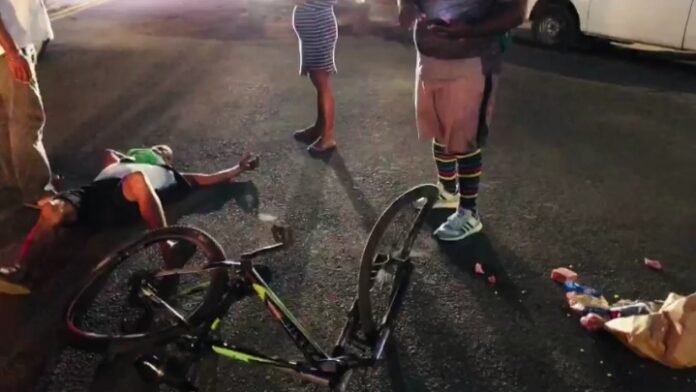 The condition of a man knocked off his bicycle is yet to be ascertained, as the Police continue to investigate the accident.

Video footage in circulation shows the man lying on the ground at the junction of High and Thames Streets, in the vicinity of ECAB.

The video also shows what appear to be groceries scattered on the street in proximity to the man and his mangled bicycle.

Persons on the scene are shown standing over the man, who was conscious, as they sought help for him by calling the ambulance.  Reports are that the man was later transported to the hospital.

As the small crowd argued on who had the right of way, a visibly upset man – believed to be the driver of the vehicle – was protesting that the cyclist should have stopped at the corner.

In an angry tone, he tells the people gathered to stop accusing him of causing the accident, since, he claims, the cyclist ran into his vehicle.

The incident reportedly occurred on Thursday, February 17, shortly after 6 p.m.