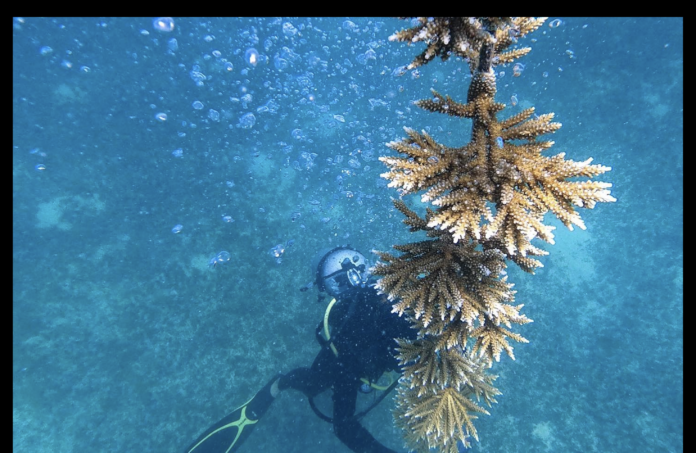 After growing over 1500 coral fragments in their nurseries, the non-profit Elkhorn Marine Conservancy is now planting thousands of critically endangered corals onto degraded Antiguan reefs.

The Elkhorn Marine Conservancy (EMC) was established in 2021 with the goal of restoring and protecting the degraded marine and coastal ecosystems of Antigua.

Yet, these ecosystems have suffered extensively over the last few decades due to pollution, unsustainable development, overfishing, disease, hurricanes and climate change.

The reef’s most historically dominant species, the elkhorn coral (Acropora palmata), known for its tall branching shape which provides exceptional habitat space and wave breaking capacity, is now critically endangered throughout the Caribbean, along with several other stony coral species.

In the summer of 2021, the team set up two underwater nurseries and populated them with over 1,500 coral fragments (small pieces of live coral). By harvesting fragments from a diversity of genetically distinct coral colonies within the NEMMA that have survived prior stressors such as disease outbreaks and bleaching events, the team strives to plant reefs that will be more resilient to current and future threats.

After a year of grow-out in the nurseries, coral fragments have increased up to ten-fold in size and are ready to be planted.

Over the past few weeks, the EMC has been harvesting large pieces of corals from their nursery structures and planting them onto the degraded reefs around Green Island and York Island, near Nonsuch Bay.

Using small amounts of portland cement or marine epoxy, coral fragments are ‘glued’ onto the seafloor. In only a few weeks, the corals will overgrow the cement or epoxy, further solidifying themselves onto the reef, and will begin growing upwards.

A small piece of each original coral fragment is kept on the nursery structure to ensure corals can be harvested from the nurseries for years to come. The team has already planted over 1,400 corals and hopes to plant over 1000 more before the end of the year.

The EMC team is now developing a strategy to protect these restoration sites from threats such as anchoring damage, pollution and overfishing. By collaborating with primary stakeholders and engaging with Antigua and Barbuda’s Government, the EMC and local partners strive to implement an integrated marine management strategy in order to protect current and future restoration sites.

The organization has plans to double their current capacity in the nursery next year in order to increase the scale and scope of their restoration effort.