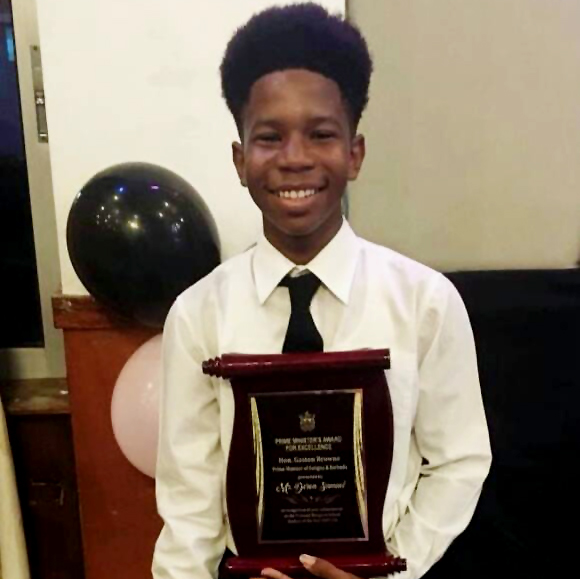 Deron Samuel, a third form student of the Princess Margaret School (PMS), who is already on the path to academic greatness is the recipient of the Prime Minister Award for Excellence. Deron received the award in recognition of his hard work and dedication to achieving high academic grades while maintaining notable involvement in extracurricular activities such as the school’s steel orchestra and a performer in the PMS’s Serenades.

Princess Margaret Secondary School recently held their annual prize giving academic ceremony at the multipurpose center where the historic school awarded students on their academic achievements for the year.

As a past student of PMS, Prime Minister Gaston Browne saw it best to continuously give back to his alma mater in any way possible. Being a recipient of academic achievements himself, awarding diligent students at PMS is one of the ways PM Browne gives back to his academic foundation.

Every year, for the past three (3) years Prime Minister Gaston Browne has provided an award for the overall top academic performer at PMS.

This is the third time Deron has captured this award. According to his parents, Kamaria Samuel and Kareme James, Deron is thrilled about capturing the award yet again.

Deron now heads into the 4th form and hopes to continue his studies in the fields of forensic science and music.

Princess Margaret Secondary School has produced two Prime Ministers, Prime Minister Gaston Browne being one of them, is committed to the continuous development of the educational institution.