The United Progressive Party fired up its base as it launched its 2018 election campaign during an event at Parliament Drive on Sunday night.

UPP leader Harold Lovell who made a “grand entrance” through a crowd of UPP supporters, said the time had come to reclaim the reigns of power that the party lost three and a half years ago.

“Do you have your weapon ready,” Lovell asked a crowd of flag-waving supporters. 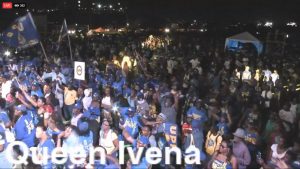 The main opposition party which ruled between 2004 and 2014 launched its campaign under the motto of Delivering Hope.

“We adopted this theme because of the hopelessness that has spread across this nation.”

Lovell urged supporters to go out and vote, reminding them “we are in a bloodless war.”

He presented the 16 candidates who are expected to be nominated today. 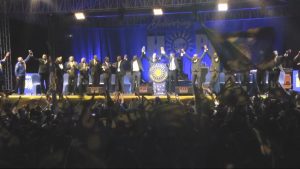 The UPP leader said the ABLP called the election expecting them to be unprepared.

He lamented the number of investments and promised employment which has not materialised.