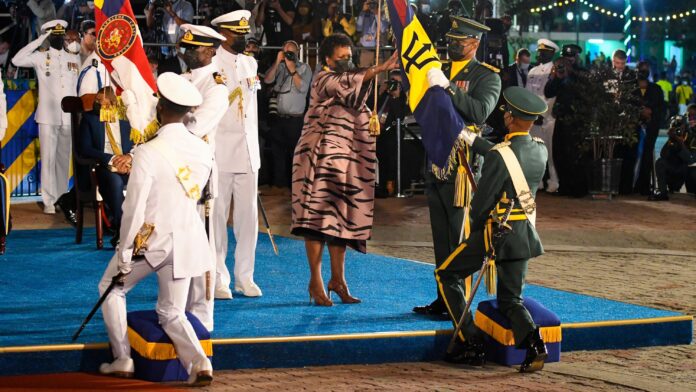 The University of the West Indies, joins the region and the world in congratulating Barbados on this remarkable milestone in its history. The island’s achievement of Republic status and the appointment its first President, Her Excellency the Most Honourable Dame Sandra Mason is a proud moment for The UWI as an indigenous Caribbean university. The University community salutes the people of Barbados and Prime Minister, The Honourable Mia Amor Mottley on the bold move to leave the country’s colonial past behind, and elect a Barbadian Head of State, on their 55th anniversary of Independence. The regional academy stands ready to serve Barbados in this next phase of nation-building, and looks forward to its continued upward trajectory of development.

Extending his congratulations, Vice-Chancellor of The UWI, Professor Sir Hilary Beckles stated, “On November 30, 2021, the people of Barbados, led by two brilliant and courageous women, completed the journey to full independence.  A proud nation has shed the shackles of being Britain’s first black slave society, to become the first country in the Caribbean in this twenty-first century to declare that the time has come for full nationhood.”

Sir Hilary, an Economic Historian and son of Barbados, extolled the occasion adding, “Fifty-five years after Neptune’s broken trident heralded the move to independence, the trident has again marshalled the forces of the magnificent Atlantic Ocean and the Northeast trade winds that brought the ancestors to these shores. The trident has wielded its power in raising the descendants of those ancestors at home and in the diaspora, as Barbados declares its status as: The Republic of Barbados.”

The shift to Republic status sees Her Excellency the Most Honourable Dame Sandra Mason transition from Governor-General to President. Her appointment brings added significance for The UWI as it follows a special convocation in September to confer upon this proud alumna, an honorary Doctor of Laws (LLD) degree for her outstanding contribution to public service. Her Excellency was among the first cohort of students enrolled at The UWI Cave Hill Campus, Faculty of Law.

Campus Principals across The UWI system have joined in sharing congratulatory statements to Barbados and Her Excellency The Most Honourable Dame Sandra Mason.

New Principal of The UWI Cave Hill Campus, Pro Vice-Chancellor, Professor R. Clive Landis conveyed congratulations to the new President and all citizens of Barbados. Speaking on behalf of the Campus he said, “Cave Hill rejoices in the Inauguration of Barbados’ first President, Her Excellency the Most Honourable Dame Sandra Prunella Mason, as we pledge to serve the new Republic on its continuing development journey.”

Principal of The UWI Five Islands Campus, Pro Vice-Chancellor, Professor Densil Williams asserted, “The leadership and the people of Barbados must be congratulated for the bold and decisive step to move their nation to a full-fledged Republic. This is a strong manifestation of self-confidence and self-belief, critical intangible factors for building a nation, especially for countries with a long legacy of slavery and colonial rule.  With strong leadership that possesses an intellectual grounding in creating a just and fair society, the future is bright for the new Barbados.”

Principal of The UWI Mona Campus, Pro Vice-Chancellor, Professor Dale Webber remarked, “The declaration of Barbados as a Republic affirms that Barbadians can orchestrate a new developmental outlook that acknowledges their colonial past, but gives prominence to an equitable and sustainable future. Prime Minister Mottley has made the ultimate statement that signals to the world her confidence in her people to manage their affairs. The time is right, and I am happy to be alive today to witness this great moment in Caribbean history.”

Acting Principal of The UWI Open Campus, Dr. Francis Severin said, “I extend wholehearted compliments, from The UWI Open Campus, to Dame Sandra Mason, the ‘pioneer’ President of the newest Republic in the Caribbean, Barbados. I feel delighted and especially proud of her cumulative achievements as a distinguished alumna of this great Caribbean and World institution, The University of the West Indies. It is an honour and pleasure—and a special moment—for us alumni of The UWI. The Open Campus wishes her optimal health and wellness, and continued wisdom and discernment, as Barbados’ new Head of State. Congratulations to the Government and People of Barbados for taking this bold and progressive step. I salute you.”

“The St. Augustine Campus in Trinidad and Tobago joins with Vice-Chancellor Beckles and the wider UWI in extending our heartiest congratulations to the people of Barbados on this momentous occasion. Being of Barbadian parentage, I feel a personal sense of pride in this accomplishment. This move to the status of a Republic – res publica, literally translated from Latin as a thing of the people –  is long overdue and marks a positive step for Barbados and our region. I look to the future, and new generations of UWI graduates who can count this achievement as not just a monumental occasion for Barbados, but certainly a pivotal one for us at UWI as we advance our mission and contribute to the revitalisation and development of all Caribbea.”