This past weekend Saturday 15th to the 16th of October, Students from the University of the West Indies, Five Islands Campus participated in a 24-hour global hackathon known as SacHacks IV. This is an intercollege hackathon founded at UC Davis in the Sacramento area, CA – USA.

The university of the West Indies is a global university ranked among top 1.5% of universities in the world. These successes are due to the research and quality education through carefully constructed degree programmes which produce global leaders in various specializations. The School of Science Computing and Artificial Intelligence (SoSCAI) of the UWI, Five Islands Campus trains local, regional, and international students in computer science, data science, and information technology. To attest the global competitiveness and the quality of our students and programmes, the school since its establishment has maintained a culture of participating in local, regional, and global competitions and challenges. Last year two teams of students from SoSCAI participated in another global hackathon known as HackUMBC. This year 4 teams involving 23 students participated in the SacHacks IV.

Digicel supplied the swag and catering for the two days. AllMart supplied a voucher to shop for anything the hackers needed for the two days and the items were delivered fresh and on time at the hacking venue.

Pictured is the Director of Academic affairs Dr. Curtis Charles with SoSCAI students.

It’s a hassle to walk around with many different important documents when needed for application which could be lost in the process. Therefore, the team at sporadic created MIMOTO. It is a national identification card that will hold a persons’ data. Along with having your social security, medical benefit and police record, it will also have a medical database of a personal in case of emergency for example, if you get sick and an EMT would need to know what medication you are allergic to and what to administer.

MIMOTO creates a database specific to an individual who holds information from their medical records, insurance and much more.

MIMOTO Features include layers of security on a cloud platform. We faced challenges in linking out Microsoft azure to our database website. Blockchain technology provide the underlying infrastructure of MIMOTO and it was a interesting in learning how blockchain technology is applied in building secure systems.

In future, we plan to implement a permission blockchain for even more security. We would also like to create a MIMOTO bracelet that would be enabled for everyone but mainly for kids so that their medical records could be easily accessed by authority.

Traborg is a trash collecting agent designed to collect small pieces of trash off the side of the road.

The agents reduce the amount of human contact with trash thus lessening the spread of infectious diseases to humans.

A lost and found stations for non-trash items picked up by TraBorg’s hardware components would be positioned in strategic locations.

Using the street view function from Google Maps’ API and open-source code for self-driving cars such as Vista 2.0, TraBorg will be able to seamlessly navigate around sidewalks, roads, vehicles, and pedestrians.

Using traborg result in proper management of waste. This then has cumulative benefits such as cleaner environment, Reduces the size of landfills, less greenhouses gases are produced (from combustion), Better Climate and Increased civilian morale

A simple to use interface that conveys relevant medical information immediately between an ambulance via the EMT’s to the hospital and its database so necessary preparations can be made beforehand and relevant medical history can be accessed.

The block diagram below shows the operations of the proposed system. Data is recorded at the accident and transferred to the hospital. This data is then cross-referenced and then the necessary preparations are made to treat the patient accordingly on arrival. This system includes useful information to facilitate real-time decision making such as notifying emergency medical personnel of the medicines that they can use for the patient.

A prototype was implemented using python and SQL.

The 24-hour event which started on Saturday midday local time came to close at 12:30 on Sunday. Both staff, faculty and students had a reflection on the experience, successes, challenges and lessons learned. Overall students were amazed by what can be accomplished in just less than 24 hours of working. From ideation to prototyping a project which included learning a number of things to complete the demonstrations of their relevant projects.

Students were thrilled by the experience and what they learned about themselves and each other.

For example, one student explained that through this experience she got to speak to her classmates some for the first time.

Another expounded that this hackathon helped him to see the great things he can create and help him overcome the fears he had.

A student who recently enrolled in the school explained the fear of joining and thanked the senior students who helped in overcoming those fears. Another one explained on suffering from imposter syndrome and the role his team mates and FIC hacking community played to help him gain confidence and understand his value to the team.

The senior students who have participated in hackathon from last year were pleased by the improvements in this year’s event. They highlighted how this event has been instrumental to their growth as young professionals in the field.

These were some of the highlights on this event and its transformative effect to our students. The students learned skills necessary to function in the workplace such as team work, collaboration, communication, problem-solving, innovation and creativity.

In just 24 hours the students were energized to create new and relevant technologies for our society, creolizing the technology to solve relevant challenges facing Antigua and Barbuda and the OECS region at large.

Message from Director of Academic Affairs, Digicel and Organizing Team

The closing ceremony was blessed by the presence of Mr Marlon George, the Head of PDD Department at Digicel Antigua, Dr Curtis Charles, the director of academic affairs at the Five Islands Campus. The event was chaired by Dr Ilenius Ildephonce, Lecturer and Interim Head of SoSCAI who recognized the contribution of Dr Emilie Ramsahai a lecturer in data Science and Statistics and Ms Jessica Brown, SoSCAI secretary. These were instrumental in coordinating the event locally including coordinating with the sponsors and planning the event. They also ensured the event preceded smoothly without any challenges. He thanked them for their hard work which can easily be shadowed by the successes of the event. Both Dr Ramsahai and Ms Brown expressed how impressed they were with the students and are thrilled to be part of the organising team.

Dr Charles expressed the support from the University leadership. He applauded the students for their arduous work, innovative ideas and urged them to continue innovating transforming the region. Dr Charles expressed the strategic partnerships formulated by the University with other reputable institutions for the advancement of the UWI, FIC. He urged the students to take advantages of the resources available and promised them more opportunities created through these partnerships. He further elaborated on the benefits accrued from supporting a team of students to physically attend these events and represent Five Islands Campus and Antigua and Barbuda. He presented a case where students can be facilitated to attend and compete at HackUMBC in the future.

Dr Charles was followed by Mr George who applauded the work being done by the school and was pleased by the projects presented. Mr George was pleased by the problem-solving abilities demonstrated by the students through their solutions. He advised that the presented projects have the potential to transform our society and some could be commercialized. He expressed his support and the support of Digicel in advancing the local society. He was elated that Digicel was involved in supporting this event and further expressed their continued support in the future.

The ceremony was closed by presentation of local prizes for the winning teams and individuals while they wait for the official closing of the hackathon from the Organizers at UC Davies.

The winner for top prize was MIMOTO who were awarded a Gift card/ cash worth 300.

The hackers voted for the funniest hacker and the prize was won by Mr JR Celestie, a first-year student pursuing BSc Computer Science.

All four female hackers received a gift card each worth 100 from Mrs Tracy Benn-Roberts and was presented by Ms Kerrie-Faun Nathan, both are firm believers and an advocates for the role of women transforming our society.

In his closing remarks, Dr Ildephonce applauded the students for their hard and tireless work, the sponsors for making this event enjoyable, the university leadership specifically Dr Charles for his continued support, and Mr George for making himself available for both days. He also expressed the schools’ ambition to engage with partners locally and internationally in the establishment of an Innovation Hub at the Five Islands campus where these projects and many others could be developed into products. He welcomed partners such as Digicel to support this project.  He also expressed that SoSCAI is interested in starting a locally organized hackathon focused on addressing local issues in healthcare, education, entertainment, hospitality and tourism etc. He welcomed partners and sponsors to bring their problems and tap into the creativity of the students, staff, and faculty in addressing local and regional issues for the sustainability of our societies. 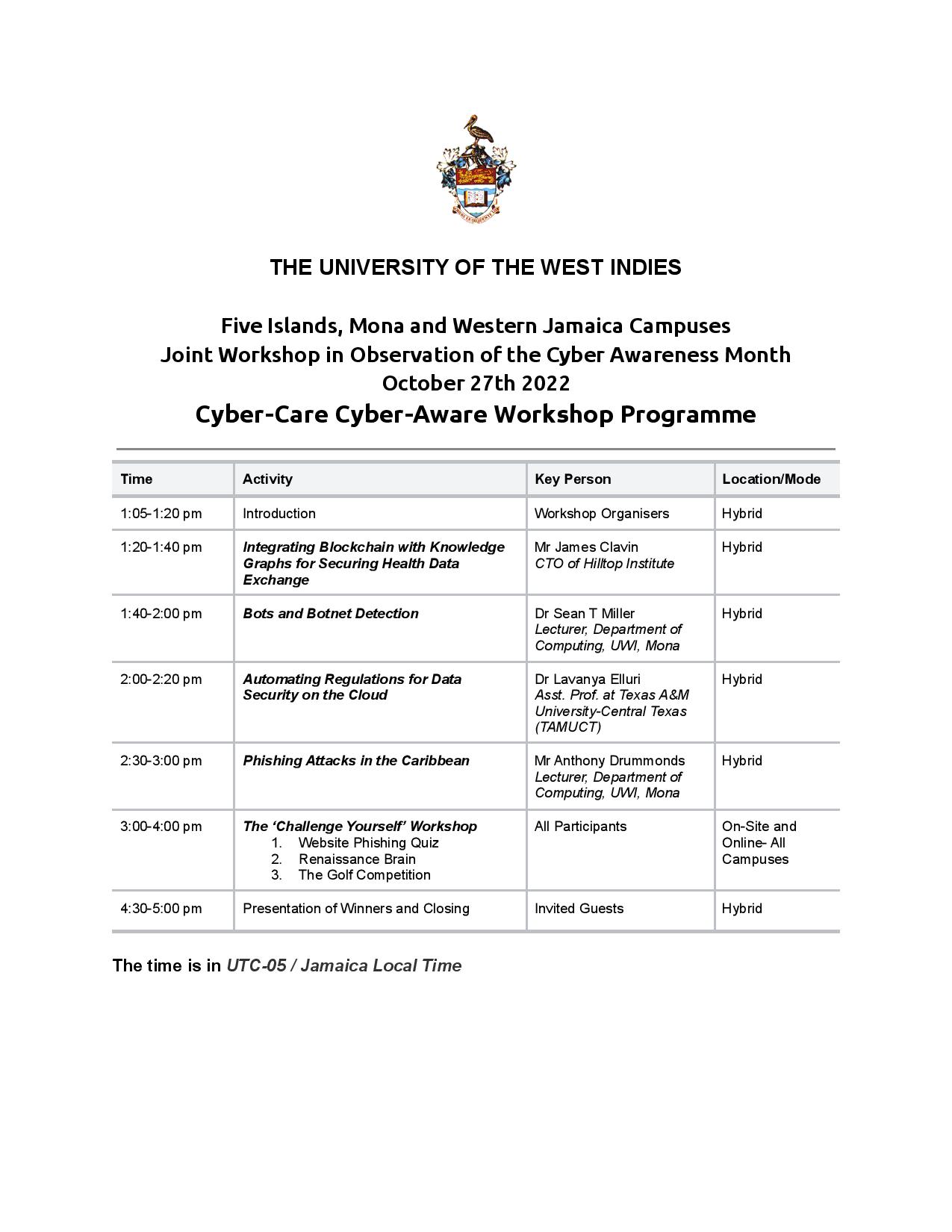 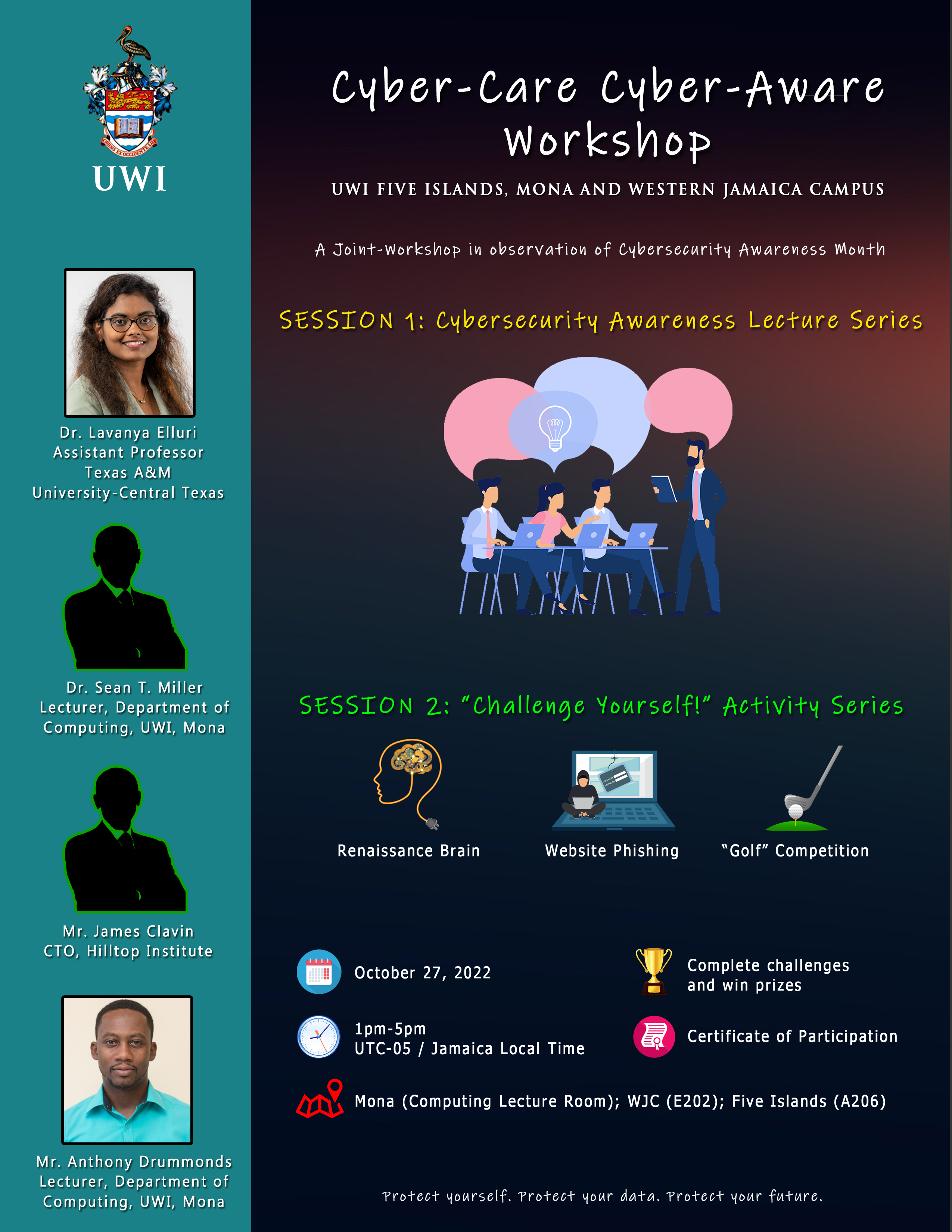