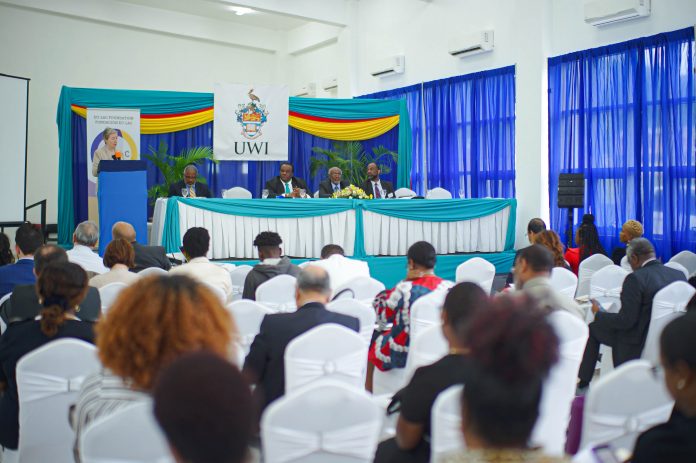 On January 14-15, The UWI Five Islands Campus successfully hosted a conference—its first since launching in September 2019—on migration policies, organised by the European Union-Latin America and Caribbean (EU-LAC) Foundation. The well-attended, two days of dialogue brought together stakeholders from the different layers of society, including experts from the European, Latin American and Caribbean regions, representatives of the Antigua and Barbuda Government, international organisations, the private sector, civil society, academics and activists.

Its mandate was to foster closer ties between civil societies for discussions aimed at improving existing migrant policies and deepening the connections between states of origin and their migrants.

Professor Stafford Griffith, Interim Pro Vice-Chancellor and Principal of The UWI, Five Islands is gratified at this historical occasion for the campus to host its first international conference. He noted that this was an opportunity to raise the profile of the recently opened Campus on the international plane and added that hosting an event of this calibre serves as a boost to its reputation and reiterates its importance to the community.

“This seminar deals with migration and emigration, which are issues of concern to the wider Caribbean public and clearly, must be important to Antigua and Barbuda and the Eastern Caribbean countries, the countries of the Organisation of Eastern Caribbean States (OECS) in particular,” Professor Griffith said.

Agreeing that all the governments of the Caribbean, and most particularly Antigua and Barbuda, have vested interests in migration patterns and policies due to their deep-rooted and shared ancestral history, Attorney General of Antigua and Barbuda and Minister of Legal Affairs, Public Safety and Labour, the Honourable Steadroy Benjamin said his government is keen on the trends in intra-regional travel and extra-regional emigration.

Participants presented and discussed matters relating to how countries of origin accommodate the rights and needs of their emigrants, facilitate the participation of emigrants in political, social and economic life, handle issues of citizenship of emigrants’ kins, remittances and the transfer of social rights.

Executive Director of the EU-LAC Foundation, Paola Amadei, said there were many positive outcomes from the initiative. “One of the lessons is, we see all the advantages of sharing experiences across countries, not all experiences can be translated in the same way in all countries, but they can help to shape better policies,” Amadei said.

Dr. Luicy Pedroza, Research Fellow at the GIGA German Institute of Global and Area Studies said she was keen for the seminar to be held at the new UWI Five Islands Campus, in Antigua. Dr. Pedroza currently leads the Research Project, ‘Every Immigrant Is an Emigrant: How Migration Policies Shape the Paths to Integration’, which compares migration policies of more than 30 countries. She was able to identify research partners within the Antigua and Barbuda Immigration Department to collaborate on data collection and reporting, an exercise that will help in determining where the country falls in global migration trends.

The conference also touched on the current movement of persons within the Latin American and Caribbean region, chiefly from Venezuela. “We are overwhelmed by what is happening in Venezuela. Venezuela migration has increased massively to its neighbouring countries and that includes the Caribbean, especially Trinidad and Tobago,” Dr. Pedroza said.

But among the many highlights of the conference, relevant to our Caribbean territories, was that drawn from the presentation by Dr. Keith Nurse Principal/President Sir Arthur Lewis Community College, Castries, St. Lucia, titled, ‘Beyond Remittances: Migration, Diasporas and Development in the Caribbean’.

Dr. Nurse,  who formerly served The UWI as the World Trade Organisation Chair, Executive Director at UWI Consulting Inc., Director of the Shridath Ramphal Centre for International Trade Law, Policy and Services and Senior Fellow at the Sir Arthur Lewis Institute of Social and Economic Studies, and remains adjunct faculty at the Arthur Lok Jack Global School of Business in Trinidad and Tobago, noted that the growth of the Diasporic political economy signals the “emergence of a new post-national, post-industrial and post-development phase.” He made the pronouncement that, “remittances and other diasporic flows exceed traditional external flows, for example FDI”, and that these remittances and other diasporic flows have impacted poverty reduction, structural inequalities and are facilitating diversification in the economy.

Minister Benjamin declared that the impact that the conference has had, is exactly what his government expected of the Five Islands Campus on the country’s overall development and that this was only the “breeding ground of things to come.”

The countries that were represented at the event included Argentina, Colombia, Chile, El Salvador, Germany, Jamaica, Mexico, Nicaragua, Romania, Spain, St. Lucia and Trinidad and Tobago. The conference was funded by the Germany Federal Ministry of Foreign Affairs.