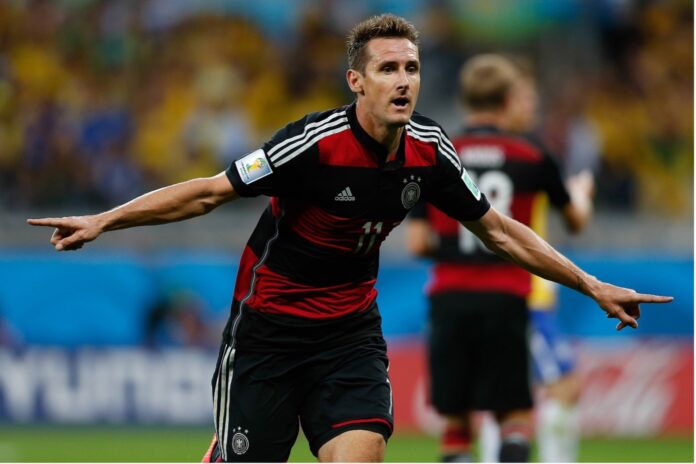 When it comes to the World Cup finals, the most memorable players are those who hit the back of the net on a regular basis.

For footballers, there’s no better feeling than scoring a goal while representing your country at a World Cup, and some have been lucky enough to do just that on a regular basis.

With the 2022 tournament in Qatar getting underway, and as fans explore the World Cup odds with piqued interest, let’s take a look at the top scoring players in the history of the competition.

Sitting pretty at the top of the World Cup scoring charts is Miroslav Klose, who brought his shooting boots to four successive tournaments from 2002 to 2014.

The highlight for the Germany forward was winning the Golden Boot in 2006 with five goals, as Germany finished third. He also bagged five in 2002, four in 2010 and two in 2014, when Germany won the World Cup in Brazil.

Klose was an instrumental player during a hugely successful period for German international football, and he’ll always be remembered as a World Cup icon.

You can’t have a list of World Cup goalscoring supremos without mentioning Ronaldo. The Brazilian striker is a legend of world football, but it was at the World Cup where he truly made his presence felt.

Ronaldo’s first appearance at a World Cup finals came in Brazil’s successful campaign at USA 1994, although he didn’t actually hit the net in that tournament. 1998 was his breakthrough year, notching four goals in France before Brazil eventually lost to the hosts in the final.

2002 followed a similar pattern, although this time Ronaldo laid claim to the Golden Boot, as his eight goals helped fire Brazil to another World Cup triumph.

He bagged three goals in the 2006 World Cup in Germany, taking Ronaldo’s final tally to 15 goals in the tournament finals.

It was the 1970 World Cup that really saw Muller produce his best, even if West Germany only finished third in the end. His impressive 10 goals helped fire his team to the semi-finals, before they just fell short to Italy.

If you thought Muller’s 10 strikes in one World Cup was an impressive tally, what about Just Fontaine notching 13 goals in the 1958 tournament — playing just six matches along the way.

Fontaine’s total for one tournament will likely never be beaten, and although he couldn’t quite fire France to the World Cup final that year, he will remain a World Cup legend forevermore.

Last but certainly not least, Pele gets onto our list as the fifth-highest goalscorer in World Cup history. The Brazilian icon burst onto the scene in the late ‘50s, and played in four tournaments in total, helping Brazil to glory in 1958, 1962 and 1970.

As well as trophies, Pele contributed plenty of goals in that time, ultimately racking up 12 goals in World Cup finals. His most profitable tournament was the 1958 tournament in Sweden, where he notched six strikes.