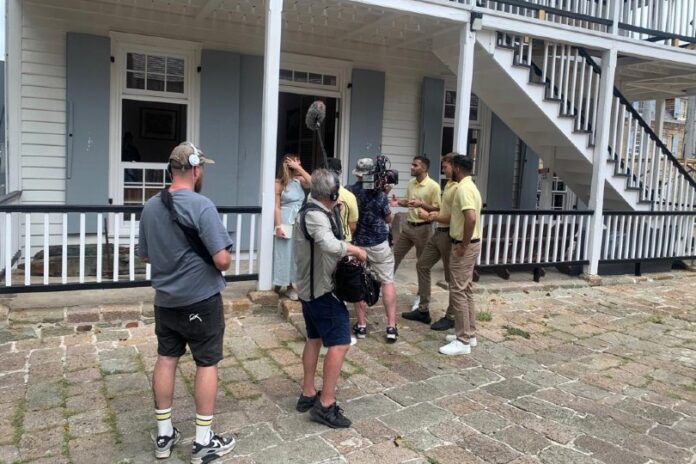 TTG: It had all The Apprentice essentials – wildly spurious claims of business acumen, plenty of bickering and a good amount of incredulous eyebrow raising from Karren Brady and Claude Littner. But instead of pounding the streets of grey London, the candidates were running around sunny Antigua, with plenty of airtime given to sweeping island panoramas, powdery sandy beaches and aquamarine seas dotted with yachts.

It was enough to have anyone dreaming of a rum cocktail with their toes in the sand, not just the poor candidate fired at the end. Last night’s episode would have been a surefire ratings hit for the BBC – Antigua and Barbuda are sure to feel the bounce too.

Cherrie Osbourne, UK & Europe director for the Antigua & Barbuda Tourism Authority, tells us what it takes to produce an overseas episode of the long-running series.

HOW LONG AGO DID YOU START PLANNING LAST NIGHT’S EPISODE?

The Antigua and Barbuda Tourism Authority had been in discussions with The Apprentice production team for over three years, from our initial discussions to when it aired last night! The recce was due to take place in April of 2020, which we had to cancel two days before the UK went into lockdown and travel came to a halt. It was crucial for us to set Antigua and Barbuda apart from other destinations and showcase what makes our island nations so special, especially in terms of curating exciting task ideas that would dazzle viewers at home.

WAS IT EASY TO CONVINCE THE PRODUCERS TO COME TO ANTIGUA AND BARBUDA?

The show had been to South Africa and Malta previously, but never to the Caribbean.  The production team didn’t need much convincing at all regarding Antigua as a destination! We were delighted that they saw how special the islands are by making it the launch episode for the new series.

HOW INVOLVED WERE YOU WITH SHAPING THE TASK?

We curated the tasks with the production team, we worked in tandem for months and after the recce took place final decisions were made. We looked at many options – when discussions first began at the beginning of 2020 a shopping task was in the mix but we felt strongly through Covid to make sure that we did something that celebrated tourism 100%. 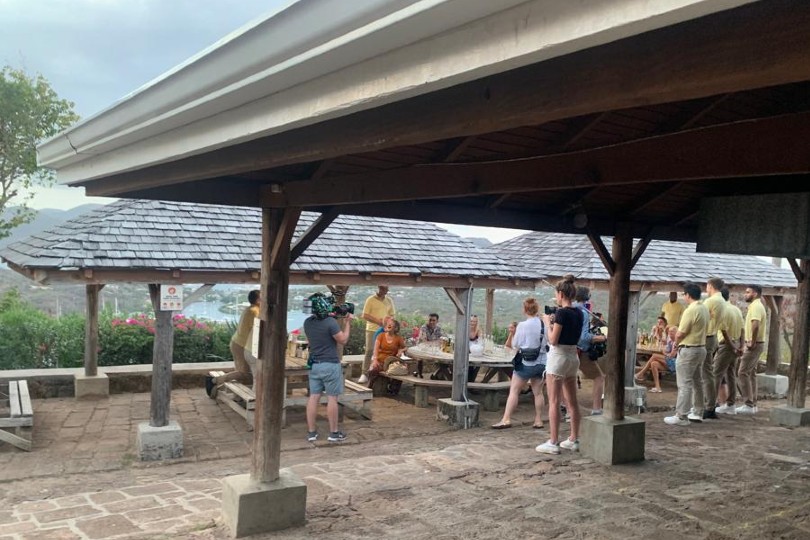 WHAT DID ANTIGUA AND BARBUDA NEED TO BE ABLE TO OFFER TO HOST AN EPISODE?

We provided extensive on the ground support covering everything from hotel accommodation, international flights and domestic transport for the entire crew and cast, as well as sharing local knowledge to provide solutions for getting around and ideas for unique locations and activities.

WHEN DID FILMING TAKE PLACE AND WHERE DID THE CANDIDATES STAY?

Filming eventually took place in April 2022 – the candidates came to Antigua for three nights and four days and they stayed in the Royalton Antigua, which opened in 2019.

WHICH AREAS WERE COVERED IN FILMING?

So many highlights! Everything that featured in the show can be experienced by all guests to the island from tropical catamaran tours on the turquoise waters, to hikes of our Unesco World Heritage sites Shirley Heights and Nelson’s Dockyard, and much more. 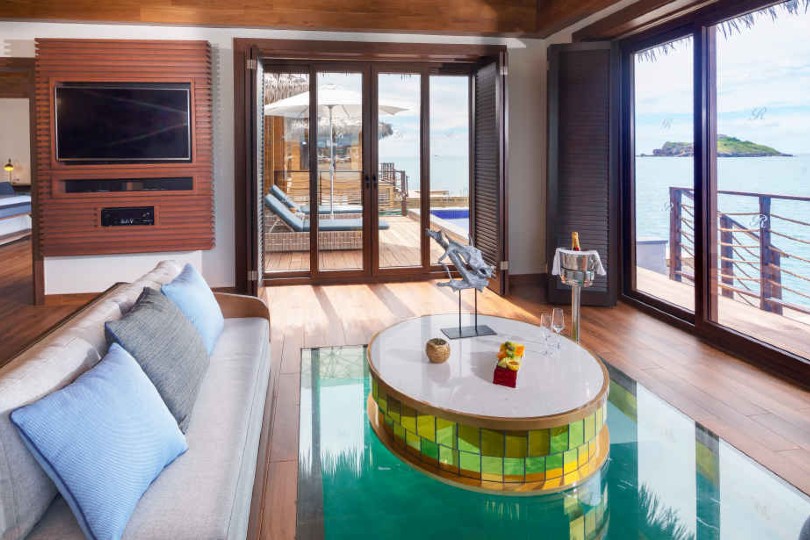 WHAT DID THE TASK INVOLVE?

The task focused on tourism, prompting the teams to devise island tours and excursions. The first day saw the candidates split into two teams (boys vs girls) and they were given different tours to choose from that they’d eventually have to sell. The options covered land and sea excursions, and the candidates had the opportunity to expand and enhance them to boost sales. Whoever made the most profit won!

The girls opted for the sea excursion – a gorgeous catamaran tour with a few special add-ons. The boys picked a cultural, historic tour of Nelson’s Dockyard. The first day the teams went out fact-finding, learning as much as they could to act as guides, and a sub team negotiated deals with local operators before selling the tours to tourists.

On day two, the tours took place. The boys tour of Nelson’s Dockyard featured a short hike, a visit to Clarence House and closed with rum tasting at Shirley Heights, whereas the girls went out to see Antigua’s coastline from the sea on a catamaran and stopped at the Royalton for pottery painting. The teams then raced back to the Royalton (gone midnight) and the production team calculated takings, spend and profit. You’ll have to watch the episode to uncover more!

TELL US A FEW INSIDER SECRETS…

The teams sold to genuine holidaymakers in various places, from hotels to beaches, and actual money changes hands! Filming days are long and the contestants are really put through their paces, the crew go out of their way to make sure no tasks are shared or talked about without cameras rolling. Karren Brady and Claude Littner are generally really interested in the tasks and take their roles very seriously, they really are the eyes and ears of Lord Sugar. The female contestants started day one in new killer heels, they were in pain by lunchtime! 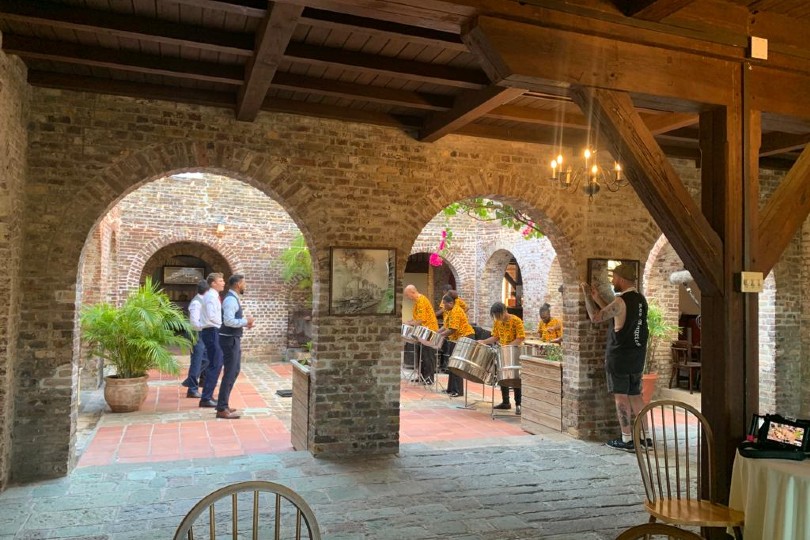 With tasks 100% focused on tourism, the show is sure to spark to interest in Antigua and Barbuda

WERE ANTIGUANS AWARE OF THE APPRENTICE?

Yes – Antiguans are a fan of the show and the US version especially.

DID THE CANDIDATES GET ANY DOWNTIME?

Without a doubt the candidates enjoyed their time on the island – they were in paradise! On our final day we all enjoyed some downtime by the beautiful beach at The Royalton, which was a fitting way to conclude the trip.

LASTLY, WHAT DOES THE ANTIGUA & BARBUDA TOURISM AUTHORITY HOPE THIS SLICE OF PRIMETIME TELLY WILL ACHIEVE?

First and foremost, we hope to spark the interest of British travellers who are yet to visit Antigua and Barbuda and reignite the desire to return for those who have shared holidays with us before. The episode showcases the diverse range of experiences we have to offer and should transport viewers from their homes to warmer climes and vibrant vistas when it’s cold and dark in January in the UK.