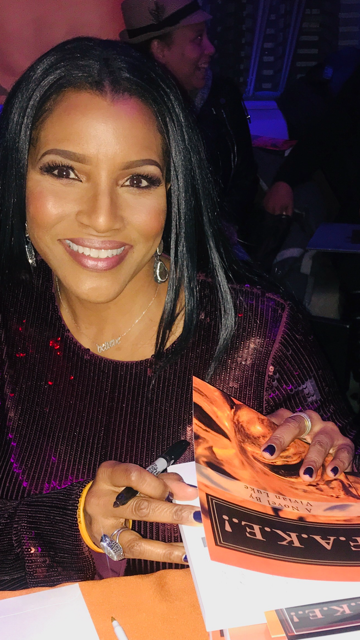 The Wadadli Youth Pen Prize congratulates Vivian Luke, whose book, F.A.K.E., netted the most votes in its #readAntiguaBarbuda #voteAntiguaBarbuda Book of the Year initiative.

On being informed of the news, Luke said in a statement, “Thank you to everyone who took the time to vote for my book…  Writing is a gift but the ability to conceive of and complete a well-structured story that is well received is a dream for any author.  So, I must congratulate the rest of the authors who were part of this process as well.”

The winning author has picked the Foundation Mixed School, alma mater of her mother and aunt, to receive a donation of books – valued at EC$900 – in her name. The donation is made possible by three Wadadli Pen patrons all of whom volunteered to make contributions anonymously – a fourth patron donated a copy of Roget’s Thesaurus.

Luke is a senior executive consultant and mother of two in the US. She is connected to Antigua and Barbuda through a line that goes back to her maternal great-great grandfather, with both sets of grandparents being born and raised in Antigua. She describes herself as “a proud Antiguan – 1st generation removed.”

Voters described F.A.K.E. as “a must read (that) reinforces the importance of creating true friendships,” “a page turner that shows us that friendship is valuable and we don’t need to live fake lives when we’re surrounded by real friends” and, simply, “a great read”. The people have spoken.

F.A.K.E. picked up the majority by one vote in a photo finish with Shawn N. Maile’s How to Work Six Jobs on an Island: an Island Boy’s Dream – described, among other things, as “a great example of time management and maximizing resources.” The book with the third most votes is Rilzy Adams’ The Gift – a romance described by one voter as “heartwarming and heartwrenching at the same time”.

The top three authors will be presented with certificates of their achievement during a brief ceremony at the Best of Books Monday 8th April 2019 at 10:00 a.m., at which time children from the Foundation Mixed will have the opportunity to select books for their school library.

This initiative is consistent – especially in a year when the usual writing challenge is absent – with Wadadli Pen’s mission since 2004 to nurture and showcase Antigua and Barbuda’s literary culture, a culture which, as illustrated by Luke’s win and Maile’s especially strong showing begins here but is not limited to our shores.

Luke’s message to the students can be read in full on the Wadadli Pen site (wadadlipen.wordpres.com). In it she spoke of her love of writing being fostered by a love of reading which she modelled from her parents, and urges, the children to “Read, Read, Read so that your intellectual curiosity may be heightened.”