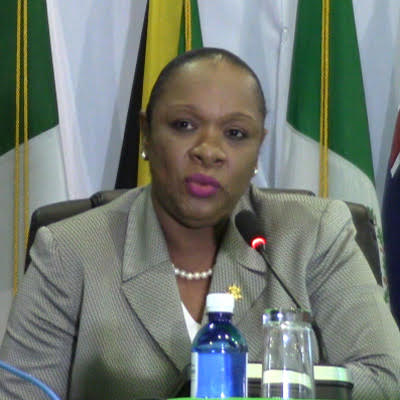 The Turks and Caicos Islands has appealed to Caribbean Community (CARICOM) countries to continue to main a united position on the issue of de-risking and the loss of corresponding banking relationships (CBRs).

Premier Sharlene Cartwright-Robinson, who came to power in this Overseas British Territory last December, said that she is aware that the 15-member regional integration movement has been looking at the entire issue of de-risking.

“What we find in the Turks and Caicos Islands is an attempt to de-risk entire sectors and that is not the way to go. We are trying to, for example, assess our financial services sector, we are complying with the various standards…but yet the goal post is moving every time we comply with the last standard and everybody else is coming up with their own standard…,” she said.

“Apart from that, our concern is also that you are looking at the casino industry, a sector that is a threat for …de-risking the entire sector,” she said, warning it may result in the illegal movement of “suitcases of money”.

Earlier this year, the Barbados-based Caribbean Development Bank (CDB) said it would be providing US$250,000 to strengthen financial transparency, and assist in preventing the loss of correspondent CBRs in the region.
It noted that in the Caribbean, CBRs facilitate a number of payment systems, including international trade, cross-border payments and receiving of remittances.

But recently, some large international banks have started terminating or severely limiting their CBRs with smaller local and regional banks, in an effort to reduce exposure to risks associated with money-laundering and financing of terrorism.

The CDB project will be a pilot initiative, and will include the Bahamas, Barbados, Belize, Jamaica, and seven-member states of the Organisation of Eastern Caribbean States (OECS).

It has three components: Strengthening the implementation of, and compliance with, international financial integrity standards by governments in the region, including updating laws and regulations as required. Increasing the technical capacity of banks and credit unions in the Caribbean to conduct customer due diligence, and adopt anti-money laundering best practices.

The CDB said this will include training for staff at financial institutions. Improving public-private sector coordination with regulators to more effectively address de-risking and develop a mechanism for ongoing dialogue between this group and external regulators and foreign banks.

The project will be implemented over three years in partnership with the Multilateral Investment Fund (MIF), a member of the Inter-American Development Bank (IDB) Group.

CDB President Dr. Warren Smith, speaking to reporters at the end of the 47th annual meeting of the bank’s board of governors, said that from the CDB’s perspective de-risking “is one of the biggest dangers to our growth and development that we have faced in recent times.

“It is so because we are small open economies and for that reason we have to depend on very regular trade. You cannot engage in trade if you cannot engage with the international financial system.

“You have to be able to move money in and out of your country. It is as simple as that. So it is something that needs to be addressed, needs to be resolved,” he said, warning however “the resolution is not a simple one”.

“There are very very moving parts here,” Smith said, noting however that the region needs to ensure that “our jurisdictions are credible, that we cannot be accused of being vulnerable to quote, unquote dirty money.

“But the point is I don’t think we are at the point yet where we have found the silver bullet, but it is a work in progress,” he said.