Thursday, August 31 has been heralded as a “great day in the Energy Sector of Antigua and Barbuda”.

So says Minister of Tourism, Economic Development, Investment and Energy, Asot Michael on the occasion of the tank hand-over ceremony at the West Indies Oil Company Ltd.

It was in January 2016 that the sod was turned at the location where now stands the completed 3 new tanks which have increased the petroleum storage capacity of WIOC by 40 per cent.

According to Michael, the hand over exercise was not just about constructing storage tanks but about creating employment; strengthening the economy and building the capacity to deliver the betterment that the people of Antigua and Barbuda want. 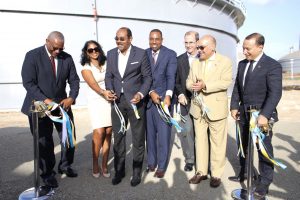 The milestone Minister Michael noted has been achieved as a result of the remarkable foresight and extraordinary negotiation skills of Prime Minister the Hon. Gaston Browne who steered the acquisition of WIOC some 2 years ago.

“Not only was the sale been completed, but WIOC has also been able to provide for several of this country’s needs. Of relevant interest is WIOC’s very positive impact on Antigua & Barbuda’s energy and tourism. Indeed, these are two sectors integral to the prosperity of this little nation. WIOC has become one of the most empowering initiatives ever contemplated by any Government in Antigua & Barbuda for helping to attain wealth for the nation while reducing the propensity for large energy imports,” he said.

Of noteworthy importance in the expansion of the petroleum industry in Antigua and Barbuda over the past year is the recommencement of the bunkering facilities, enabling the refuelling of cruise ships in Antigua and Barbuda as well as the introduction of low sulphur fuel to the yachting sector. Additionally, the tank expansion project has enlarged the nation’s capacity as a major storage hub for SOL, a major petroleum distributor in the Eastern Caribbean.

Phase 1 of WIOC’s Tank Expansion project was completed as a result of a partnership between WIOC its shareholders, The Government and People of Antigua and Barbuda, The Government of Venezuela CAPE Contractors, and SOL Petroleum.