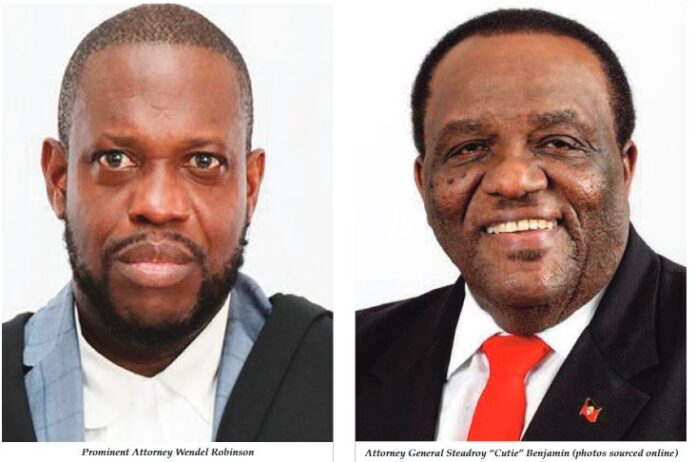 SOURCE: Daily Observer — Attorney General and Minister of Legal Affairs intends to hold further dialogue with the Antigua and Barbuda Bar Association (ABBA) and other members of civil society about instituting judge alone trials in the twin island nation.

Steadroy Benjamin made the disclosure during the ceremonial opening of the new Law Year 2021.

A judge alone trial, which is only applicable to certain cases, applies to people who are committed to stand trial in the High Court.

“Discussions are ongoing presently on the issue of trials by a jury alone in some criminal matters that is being given serious consideration at this time,” Benjamin said.

He indicated that the matter will be discussed thoroughly with key officials before it is implemented.

Last November, the ABBA was asked to consider the proposed Criminal Procedure (Trials by Judge Alone) Bill 2020 which would make provision for some criminal trials to be adjudicated without a jury but only in some matters.

This was one of the options the government was exploring as it sought to identify ways to resume criminal trials in the High Court after jury trials were suspended indefinitely due to Covid-19.

It is still unclear whether or not the association had completed the revision exercise.

Observer media reached out to President of the ABBA Lenworth Johnson who declined to comment and directed our newsroom to the Attorney General.

Meanwhile, prominent attorney Wendel Robinson confirmed that a recent meeting was held with criminal lawyers, including himself, to discuss the efficacy of implementing the measure.

Robinson added that, while in principle the legislation is welcomed, there are concerns.

“The fear among some lawyers who practice at the Criminal Bar is that some judges may get into the arena as a boxer in a match, while at the same time being a referee in the fight,” Robinson said.

“Some judges get too much involved in the questioning of the witnesses and unconsciously take over the role of the prosecutor or the defence counsel,” he added.

Several other territories in the Caribbean are giving consideration to the practice, which is already in effect in Belize and Trinidad and Tobago.