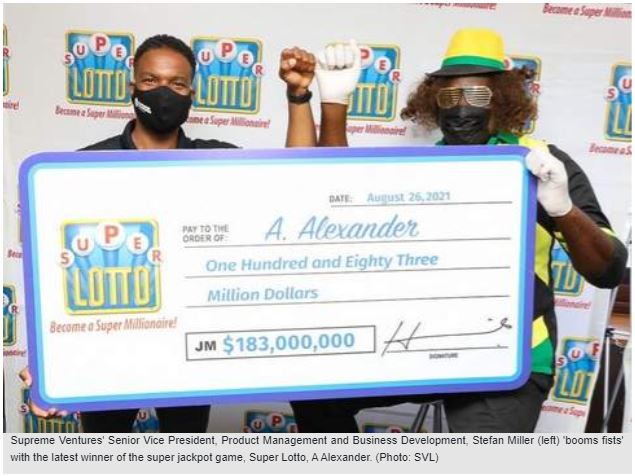 After playing Super Lotto for two years, the latest ”super millionaire” says his $183 million jackpot hit came just in time to fulfil his financial obligations and accomplish his dreams.

According to a release from Supreme Ventures, Alexander said while all eyes were on the 2020 Tokyo Olympics and team Jamaica, his eyes were on bigger concerns.

The Super Lotto winner said that like many Jamaicans, COVID-19 had hit his household hard and cash was tight, but his big win flipped his fortunes in an instant and he is now part of an elite league of gamers who have claimed their share of the biggest jackpot game in the region.

The winner said he started with a set of numbers based on a previous draw with multiples of two. Coming up with his own pattern, he held tight to his numbers saying that “it was just his time to win”. Knowing the odds were high, he played Super Lotto for two years and remained hopeful that he would win one day.

His brother was the one who gave him the good news that he had won, much welcomed news after losing his main source of income during the pandemic.

Besides taking care of home and paying off his mortgage the winner said he is no longer looking for a 9 to 5. “I am going to put it in the bank and use it as collateral to start my own business,” he said.

“This is going to change everything for me. I am going to put it in the bank and log on every day to see it,” he said.

In a statement, Supreme Ventures said it “is the only Jamaican gaming company that really changes its customer’s lives by offering the largest jackpots on the market”.