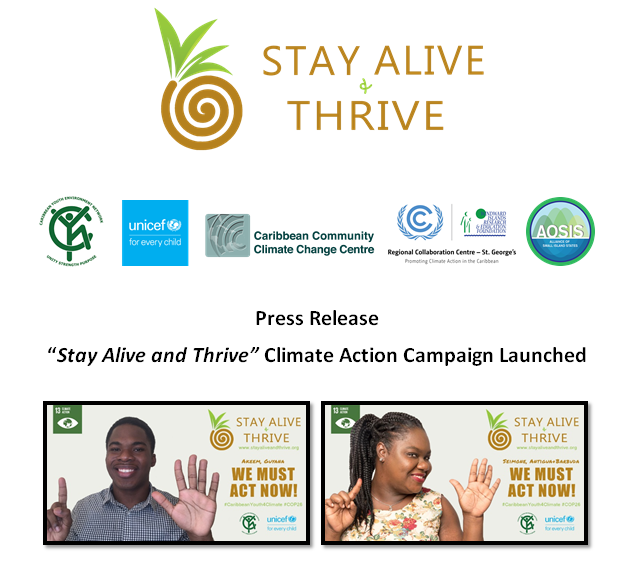 The Caribbean Youth Environment Network (CYEN), in collaboration with UNICEF and several regional partners, is launching the “Stay Alive and Thrive” Climate Action Campaign to raise public awareness about the urgent need to mitigate and adapt to climate change across the Caribbean and around the globe. Caribbean residents and concerned citizens worldwide are invited to sign the campaign’s petition at www.stayaliveandthrive.org

The Stay Alive and Thrive campaign features twenty-six Caribbean Youth Ambassadors that have come together to rally their peers, the public and political leaders to let their voices be heard at the 26th Conference of Parties (COP26) – a global United Nations summit about climate change and how countries are planning to tackle it – which is slated to be held from 1st – 12th November 2021.
“For the Small Island Developing States (SIDS) such as in the Caribbean, a lack of climate ambition could have dire consequences with more frequent or severe hurricanes, drought, and floods, as well as sea level rise that threatens our coastal communities”, said Her Excellency Diann Black-Layne, Ambassador for Climate Change – Antigua and Barbuda and Lead negotiator on Climate Change of the Alliance of Small Island States (AOSIS).
“It’s thrilling to see that Caribbean youth are uniting with passion to tell the world, especially the largest carbon emitters most responsible for climate change: ‘Act Now’; while insisting that as Caribbean people, we also need to promote and adopt greener and more sustainable lifestyles for our region to thrive”, she added.
“The petition’s initial target of 2,970 signatories corresponds to the number of days separating COP26 from 2030; the year beyond which climate scientists have warned will be too late to reverse the negative impacts of climate change. Our future as SIDS is at serious risk and time is running out.”, said Reginald Burke, Executive Coordinator of CYEN, which initiated the campaign.
“Through the Stay Alive and Thrive campaign, we’re expressing our vision for the Caribbean, which we want to be resilient from natural disasters, as well as a safe and prosperous place for us to live. Youth are ready and willing to lead the way!”, he added.
The Stay Alive and Thrive campaign was initiated by CYEN in collaboration with UNICEF, and in partnership with regional organizations including the Caribbean Community Climate Change Centre (CCCCC) and UNFCCC’s Regional Collaboration Centre in Saint Georges.
As a show of support for the initiative, the CCCCC cites the importance of continuing to keep the refrain of ‘Staying Alive’ on the minds of all Caribbean peoples especially as preparation towards COP26 advances, where it expects that the Caribbean will join in one voice to lobby for an improved infrastructure to access more climate finance not merely for adaptation, but also for loss and damage brought about by climate change.