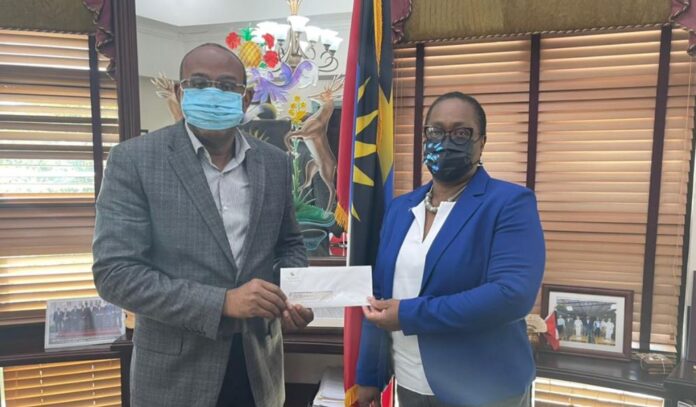 PM Browne noted that today’s contribution is testimony that although the government has not actively requested any contribution towards the program, partners like State Insurance demonstrates that we can be our brothers’ keeper and our sisters’ protector by joining the fight against COVID-19.

State Insurance Company Limited was established in 1977 mainly in response to the common concern for the extent of foreign exchange leakage created in a foreign-dominated sector. It was established with a capital sum of EC $100,000 loan by the Government and given the status of a Department of Government.

The limitations of this form of the organization were obvious, not the least being the lack of ﬂexibility in decision making and the General Manager acting as Company sole being subject to all the beneﬁts and lack of beneﬁts of a corporate body. It is also reasonable to assume that as an independent body it could attract more business. Consequently, the State Insurance Company Limited Act, 1985, established the constitution and functions of State Insurance Company.

State Insurance Company has attained high visibility not only as a result of the very impressive architectural and physical facilities within which it operates but because of the contribution it has made and continues to make in the area of sports, culture, education, and the arts. The Company also enjoys the cordial relationship and conﬁdence it has built up with International Reinsurers worldwide.