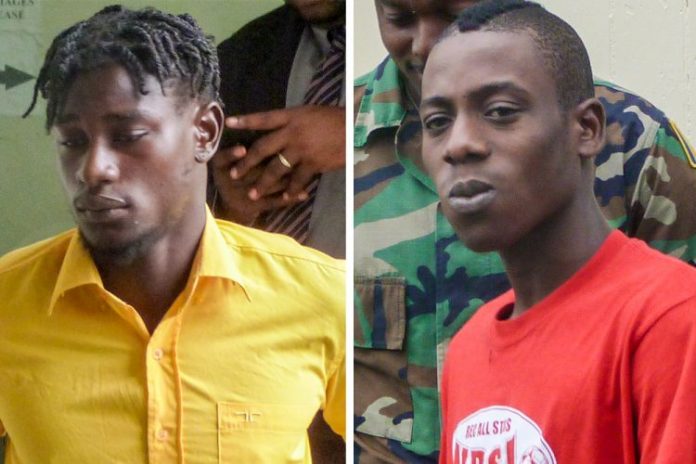 Douglas and Jordan were 15 and 17 years old respectively when they boarded the couple’s yacht anchored at Frigate Rock, Union Island. They were armed with cutlasses which they used to inflict a large wound to the left side of Curtin’s face and her left shoulder.

Douglas and Jordan were found guilty in October this year of aggravated burglary, causing grievous bodily harm and unlawful and malicious wounding with intent.

At sentencing on Friday, November 22, both men were asked if they had anything to say before sentence was passed.

Douglas said he had nothing to say.

Jordan vehemently denied the allegations that he had a cutlass when he and Douglas went on the yacht. He also denied the allegation that he “chopped people.” He said he was 16 years old at the time and it would be “hard” for him to go to prison for a “crime he didn’t do and I ain’t ha’ no knowledge about.”

Justice Cottle told Jordan that the jury believed the prosecution’s evidence that he and Douglas were both there and that they acted together in the crime. He said it did not matter which one inflicted the injuries because they “were both responsible.”

Cottle remarked that Douglas and Jordan were convicted after a full trial on indictable charges of aggravated burglary, grievous bodily harm and wounding with intent.

Cottle read the facts presented to the court during trial.

The judge said that Curtin, who suffered chop wounds to the face and shoulder, still suffers from post-traumatic stress.

“The assault has left her easily startled. The terror of her ordeal is never far from her mind. Physically, she is healing slowly. There has been facial scar with underlying nerve damage which causes numbness to this day. It is unclear that this will ever entirely resolve itself.

When she was contacted, she was of the view these prisoners should face the full consequences of the senseless, brutal attack they carried out,” the judge read in his sentencing remarks.

Justice Cottle said that the other victim, Beiser, sustained less serious injury to his head and apart from the scars on his scalp there was no other permanent physical damage.

“But while he escaped serious physical harm, the psychological impact of an assault in the dark of night in the supposed safety of his yacht cannot be overstated. He has abandoned, forever, cruising through the Caribbean. His engagement to the female complainant eventually ended as a result of the stress caused by this attack.

He had to endure medical expenses as well as expenses to purchase additional safety gear for his boat. He, too, considers the prisoners should pay in full for their actions on that night.

Justice Cottle said that according to the social inquiry report, Douglas is now 21 years and did not complete secondary education. He has previous convictions for firearm possession and burglary.

In the case of Jordan, he had seven previous convictions including ammunition possession, burglary and escaping lawful custody.

Justice Cottle said the view was expressed that the crime not only affected the two victims but it has had serious impact on the economic livelihood of many islanders.

“It contributed to the perception that the region is unsafe for yachting and visiting many beautiful tourist sites that the Grenadines offer. In fact, arrivals of visiting yachts declined markedly in the wake of this assault. And this decline in this tourism sector was particularly severe for a region which derives most of its earnings from tourism,” he said.

The aggravating features of the crime, Justice Cottle said, were: the offences were committed at night, there was group involvement, cutlasses were the weapons of choice and they were actually used on the victims. The mitigating circumstances was that “nothing was actually stolen” from the vessel.

“When I look at the aggravating features of the offenders, both prisoners have previous convictions with a history of dishonesty. Both have been convicted of unlawful possession of ammunition.

Douglas has been convicted of unlawful possession of a firearm,” Justice Cottle said.

The presiding judge said that the mitigating factors for the prisoners were their ages – Douglas 15 at the time of the crime and Jordan was 17.

For the grievous bodily harm offence, Justice Cottle said the maximum sentence is also life imprisonment which the court considers to be 30 years. He said there are no sentencing guidelines for the offence but he would adopt the approach set out by the Court of Appeal.

Justice Cottle said that the “application of gratuitous violence” was the aggravating feature.

“There was no need to use a cutlass to the head of the female complainant, there could even have been fatal consequence,” Justice Cottle said.

The Judge noted that despite being the younger offender, Douglas appeared to have played the leading role in the crime.

“I can see nothing mitigating about this offence,” he said.

On the charge of unlawful and malicious wounding of Beiser, Justice Cottle said that the maximum penalty is a period of 14 years in prison. He considered a starting point of six years.

Justice Cottle said the aggravating features were the use of cutlasses, a group involvement. The mitigating factor, he said, was that the wound was “relatively minor and caused no permanent impairment, apart from scarring.”

On sentencing Douglas, the judge began with a notional sentence of 10 years for the aggravated burglary and he went up four more years to take account of the aggravating features of the offence which in his view far outweighed a mitigating point.

“I consider the age of the offender – just 15 at the time – would normally require that I move down by about six years. But, when I consider his criminal antecedents, I find that this cancels out any reduction I would have otherwise made for his tender years,” he said, adding that he also considered that Douglas played a “leading role in this criminal enterprise.”

Justice Cottle said that another important factor which took the case out of the class of regular aggravated burglary is the “impact on the tourist industry in the Grenadines.”

“The actions of these prisoners adversely affected the economic well-being of their entire community. And that adverse effect has been persistent to this day,’” Justice Cottle said.

Justice Cottle said it was instructive that the male complainant, Beiser, said he would never again set sail in these waters and he, no doubt, he would have shared his experience with many other cruisers.

“They, too, might well adopt his attitude,” he said.

Justice Cottle gave no discount on the sentence of 14 years.

On sentencing Jordan, Justice Cottle said he was the older and he also had previous convictions. He, however, said that because his was not the leading role in the crime he would not impose a longer sentence but would impose the same as Douglas’ – 15 years.

On the charge of inflicting grievous bodily harm on Curtin, Justice Cottle said he began with the notional 10 years. However, the aggravating features far outweighed the mitigating features so he added five years. He noted there was no guilty plea so there was no discount on the 15 years.

On the charge of unlawful and malicious wounding of Beiser, the judge said the starting point was six years. He said he took into account that it was a “relatively minor nature of wound inflicted.”

He therefore moved downward to five years for both offenders.

Justice Cottle said the court had to decide whether an order should be made that the sentences run concurrently or consecutively.

“I find that all of the offences were committed during the same time so that all the sentences will run concurrently,” Justice Cottle said.

The judge also said that of the 10 years imposed on Douglas for the aggravated burglary, 29 days he spent on remand ought to be deducted. This means he will spend nine years, eleven months and one day in prison.

In the case of Jordan, the prosecution said he was at the time serving a sentence so he did not spend time on remand. As a result, he will spend the entire duration of the sentences.

Douglas and Jordan were sentenced to 10 years each for aggravated burglary, five years for grievous bodily harm and five years for unlawful and malicious wounding.