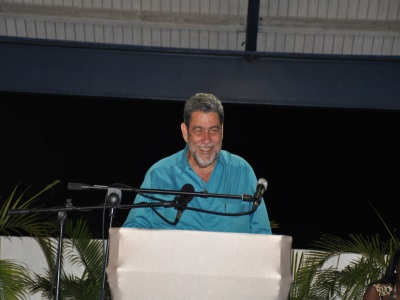 Prime Minister Dr. Ralph Gonsalves has described as “just another step in a legal process” the decision of the High Court to allow two petitions challenging the results of the December 2015 general election filed by the main opposition New Democratic Party (NDP) to proceed to trial.

“Where we are now, clearly, this is just another step in a legal process,” Gonsalves said in reaction to the judgment handed down last Friday.

“I just want to tell everybody the government continues, to tell the people of St. Vincent and the Grenadines that this doesn’t affect the functioning of anything. There is a legal process and the legal process will take its course,” he said.

In a ruling two months after hearing legal arguments, Justice Esco Henry said that while the sureties given in support of the petitions are insufficient, they are valid.

She gave each petitioner until July 7 to deposit EC$5,000 (One EC dollar =US$0.37 cents) with the High Court so that the case can proceed, or have the petitions dismissed.

However, the NDP filed the petitions, contending that the results were flawed and is contesting the ULP victories in the North Windward and Central Leeward constituencies

In her ruling, Justice Henry also rejected an application by the attorneys for the ULP to throw out the petitions as invalid, thereby paving the way for them to proceed to trial.

The matters had been sent to Justice Henry for hearing after the Court of Appeal concluded in March that Justice Brian Cottle had shown apparent bias in a decision in June 2016 to throw out the petitions as improperly filed.

Gonsalves said that Justice Cottle had had “two bites at the cherry in terms of the law” and on each occasion came to a conclusion in law different from Justice Henry.

“I don’t want people to be going about to say that the law is an ass, that two judges really can’t agree on it — but some people way well say that,” said Gonsalves, a lawyer.

Gonsalves said that Senior Counsel, Anthony Astaphan, lead counsel for the government in the matter, had made public that he has written to the Chief Justice asking that a different Court of Appeal be empanelled to review that aspect of the Court of Appeal judgment relating to waiver on the apparent bias issue.

He said that Astaphan had argued before the Court of Appeal that even if there was apparent bias, the lawyers for the petitioners had gone along with the proceeding and had expressly said they had confidence in Justice Cottle hearing the matter.

“In other words, they went along with everything, and, having lost, they then try and do — for want of a better word — a forensic or judicial ambush,” Gonsalves said.

He said the government’s legal team was yet to receive the written judgement but will study it and will provide the necessary advise.

Gonsalves said that the government’s legal team was also in consultation with Senior Counsel Douglas Mendes of Trinidad and Tobago, whom he described as “another esteemed lawyer.

“So that this is just another judicial moment in an on-going legal battle,” Gonsalves said, adding in all of this, it must be remembered that there is a government “which was duly elected, which the CARICOM observers, the Commonwealth observers, the OAS observers said that the election was free and fair and reflected the will of the people.

He said that while the law is important, it is also important to recognise representative democracy.

“The courthouse doesn’t determine who represents you. I want to emphasise that. People who represent you are those who people vote for in an election and there will be other elections in St. Vincent and the Grenadines, whether before or at the time of the year 2020 in which real flesh and blood people, who are entitled under the law and Constitution to vote, will vote. That is our system. Judges do not decide who are your representatives.”

Gonsalves said he wanted the population to recognise this and with the two judges coming to different conclusions, there is “confusion on the law, which should be a very straightforward matter”.

The NDP celebrated Friday’s ruling with a rally outside its party’s headquarters, Democrat House, and Gonsalves said “some who believe that they have some kind of victory here that it is a matter of time before they are inside of the seat of government, oh there is a long, long stretch before that.”

The Prime Minister further said that the opposition also thought they were going to be back in government in each of the four elections since 2001.